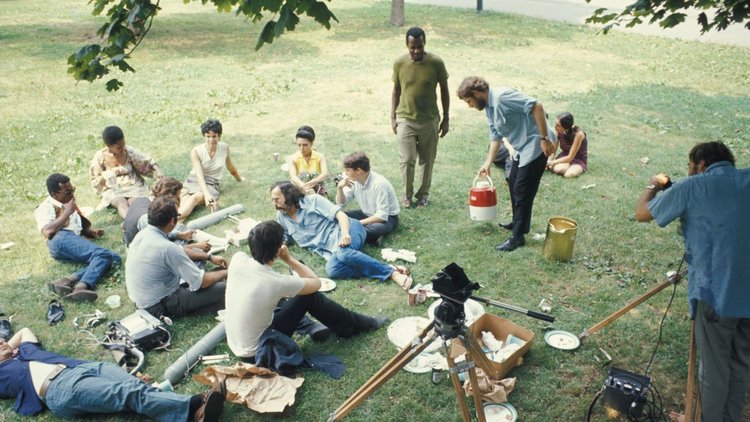 In his wildly innovative fiction/documentary hybrid, Symbiopsychotaxiplasm: Take One (1968; 75 min), director William Greaves presides over a beleaguered film crew in New York's Central Park as they attempt to figure out what kind of movie they are making. The project defies easy description: a couple enacts a break-up scenario over and over, a documentary crew films a crew filming the crew, locals wander casually into the frame. Yet this sixties counterculture landmark remains a tightly focused and insightful movie about making movies. The screening will be followed by a talkback session addressing the film's formal experimentation and critical political interventions with David Greaves, William Greaves’s son and co-editor of the film, and Louise Greaves, president of William Greaves Productions and the director’s widow. They will be joined in conversation by New York-based artist Aisha Cousins, who creates live performance art scores that engage Black audiences in exploring ideas of beauty and processing cultural shifts.

This Studio Screen event is the third installment of our annual Studio Screen partnership with Maysles Cinema. Now in its second year, this collaborative film series highlights how film and contemporary art practices intersect and address the on- and off-screen legacies of under-represented cultural producers. This year's selection of films explores the boundary between documentary and narrative filmmaking, and is thematically inspired by The Studio Museum in Harlem's exhibition, Fictions—a survey of recent work by nineteen emerging artists working to imagine and reimagine history and identity through visual practice.

This partnership series is presented as part of inHarlem, a Museum initiative encompassing a growing range of dynamic exhibitions and programs designed to explore innovative ways to engage the community beyond the Museum's walls. inHarlem programming is made possible thanks to support from the Stavros Niarchos Foundation; William R. Kenan Jr. Charitable Trust; Rockefeller Brothers Fund; National Endowment for the Arts, and the Marcus Garvey Park Alliance with funding provided by the Harlem Community Development Corporation. Additional support is provided by The New York City Department of Cultural Affairs; The Andrew W. Mellon Foundation; the New York State Council on the Arts with the support of Governor Andrew Cuomo and the New York State Legislature and the New York City Council.