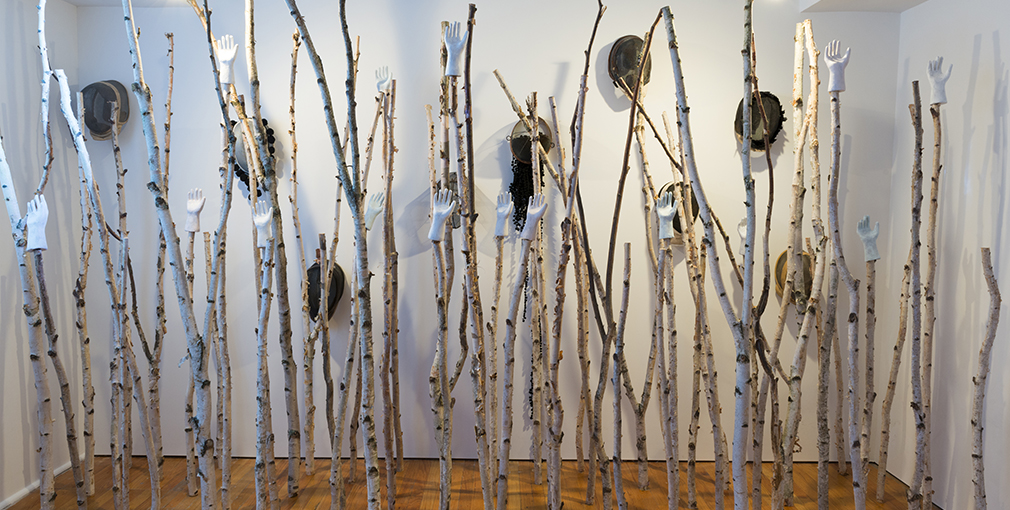 Join us at Studio Museum 127, the Museum's temporary satellite location, to meet 2018 artists in residence Allison Janae Hamilton, Tschabalala Self, and Sable Elyse Smith, and be among the first to view their works in progress. Conceived at the formation of the Studio Museum fifty years ago, the Artist-in-Residence program remains central to the Museum's mission. Open Studios is free and open to all.

Allison Janae Hamilton (b. 1984, Lexington, Kentucky) is an interdisciplinary artist working in sculpture, installation, photography, video, and taxidermy. Using plant matter, layered imagery, sounds, and animal remains, Hamilton creates immersive spaces that consider the role of the American landscape in concepts of “Americana” and social constructions of space, particularly within the rural South. Hamilton’s work has been shown at institutions including the Museum of Modern Art, The Jewish Museum, the Smithsonian National Portrait Gallery, Fundación Botín, Santander, and the Istanbul Design Biennial. Hamilton was a 2013–14 fellow in the Whitney Independent Study Program and has been awarded residencies at Recess, New York; Fundación Botín, Cantabria, Spain; and the Rush Arts Foundation, New York. She received her Ph.D. in American Studies from New York University and her MFA in Visual Arts from Columbia University. She lives and works in New York.

Tschabalala Self (b. 1990, Harlem) makes syncretic use of painting, printmaking, and assemblage to explore ideas surrounding the Black female body. Constructed with a combination of sewn, printed, and painted materials, Self’s exaggerated depictions of bodies traverse a variety of artistic and craft traditions. The physiological and psychological characteristics of her figures also reflect Self’s personal desire to articulate cultural attitudes and realities as they relate to race and gender. She writes, “The fantasies and attitudes surrounding the Black female body are both accepted and rejected within my practice, and through this disorientation, new possibilities arise.” Her work has been included in solo and group exhibitions at Tramway in Glasgow, the New Museum, and Art + Practice, among others. Self received her BA from Bard College and her MFA from Yale University. A 2017 recipient of the Joan Mitchell Foundation Painters & Sculptors Grant, she lives and works in New York and New Haven.

Sable Elyse Smith (b. 1986, Los Angeles) is an interdisciplinary artist, writer, and educator whose practice considers memory and trauma, working from the archive of her own body to mark the difference between witnessing and watching. “To see,” she writes, “is unbearable.” Her work has been presented at institutions including MoMA PS1, the New Museum, and Recess Assembly. It has also been seen through Artist Television Access in San Francisco and at Birkbeck Cinema in collaboration with the Serpentine Galleries. Sable Elyse Smith: Ordinary Violence is on view at the Queens Museum through February 18, 2018. Her writing has been published in Radical Teacher, Selfish Magazine, Studio, and Affidavit, and she is currently working on her first book. Smith has received awards from Creative Capital, Fine Arts Work Center, the Queens Museum, Skowhegan School of Painting & Sculpture, the Franklin Furnace Fund, and Art Matters. She recently served as a visiting critic at Columbia University and is currently a visiting artist in at Virginia Commonwealth University. She lives and works in Richmond, Virginia.