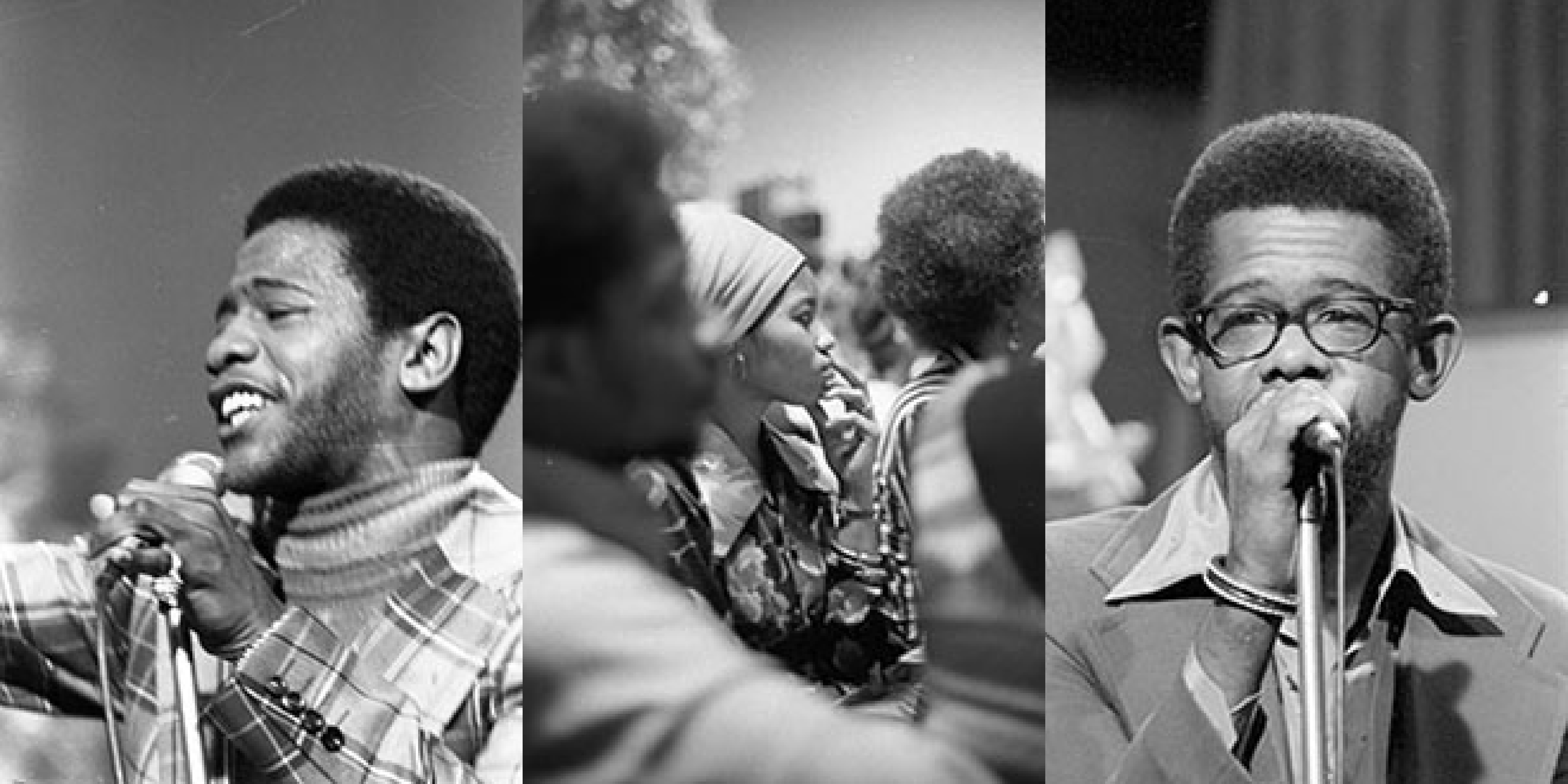 In the fall of 1968, visionary producer Ellis Haizlip embarked on a mission to televise the Revolution. Produced and hosted by Haizlip, SOUL! aired from 1968 to 1973 on New York City’s largest public broadcasting station, WNET, and blended the medium’s prevailing formats: the variety show and the late-night talk show. Taped in front of a studio audience, each hour-long episode ushered trailblazing Black artists and thinkers onto the small screen for revelatory performances and candid, often pointed, conversations.

Toni Morrison, who had just published her debut, The Bluest Eye, read from its pages to the SOUL! audience. George Faison, fresh from his time in the Alvin Ailey troupe, performed “Poppy,” a ballet set to music by Miles Davis and that was unequivocal in its stance against heroin use. Mrs. Georgia Jackson, the mother of slain revolutionaries George Jackson and Jonathan Peter Jackson, criticized the flattening of incarcerated people’s experiences.

SOUL! represented an experimental, creative home for artists who would not have been featured on TV, an open forum where Black radical thought was taken seriously, and a love letter to its Black viewers. It also served as a site of political education, with Haizlip effectively mobilizing viewers for a letter-writing campaign to protest the show’s defunding and eventual cancellation. Half a century later, Ellis’s niece Melissa Haizlip sought to record its legacy in the form of the documentary Mr. SOUL!, pairing vibrant archival footage of the show with interviews of some of the stars who shined and flared on its stage.

The following quotes represent key themes that emerged over the course of the conversation. These themes include definitions of value as it relates to the sustainability of Black institutions, what it means to represent blackness on TV and the role of the church in Black cultural production. In the end, our panelists offered more than a conversation, but a celebration of blackness, activism, and the groundbreaking history of SOUL!

“There were no grants. There was nobody looking for us. There was nobody waiting for us. We had to create in our cubicles, in New York, in our little pockets of creativity. We sang, we danced, we did all of those things, but Ellis gave us a bigger platform in which we could imagine. While dancing with [Alvin] Ailey, I went to Africa in 1966 and observing all of those people, I thought I had really found home. But I didn't really find home until I came back from Africa and then found myself in the turmoil of the 60s. Detroit was on fire. DC was sizzling. They had burned all of our cities but those were our cities.  But where was our self-esteem?  Where was our genius?  It would only be found in the stories we told.  Some of them were harsh stories. Some of them were bitter stories. But where was the joy?

I saw my brothers and sisters in New York, nodding, overdosing on the drugs that they took. We were all there. How do you put it into a format that we could live with? So, I created “Poppy,” which was a ballet, and poppy is the drug that heroin is derived from.  In that [ballet], I was able to create with Miles Davis who gave me my first soundtrack to dance to.”

“Ellis Haizlip already knew that Black excellence existed and he wasn't asking permission, or needing validation, or justification of Blackness.  He was already sharing a love affair with Blackness, with our Blackness, and to put that on screen and to say, we're not here to entertain you.  We're not here to necessarily educate you.  We're here to share in the Black experience, and whatever you take from it, that's great, but this was like the fundamental “for us, by us” mentality.  You know, before the hashtag was in, that's what he was feeling.  And this notion that he would say this is what is happening in Black America.  We are a nation of people, not just a nation within a nation.”

“Whenever I'm asked to talk about the ‘moment’, I get this pit in my stomach because we are not ‘the moment.’ We were here yesterday and we're going to be here tomorrow. I always go back to the idea of innate value and how important it is to––in my case––be protective of the artists I work with, making sure that discussions are really around the work. But I’m excited by whatever this [moment] is because I end up in more conversations with the three of you all. I'm inspired by that. I think that will help to solidify more and more spaces for ourselves, for the artists that we work with without thinking about the rest of the world that's kind of late to the party.

If you step back and you actually look at the numbers, the metrics, the space that we take up in the global art world, it is still so ridiculously minor.  It's so small. That's also part of my resistance to even having a discussion about a moment when we're not anywhere close to being represented in ownership, in the marketplace, as it relates to speaking very specifically around the art world.  But that's certainly not unique to the art world.  How do we keep pushing?  How do we take up more space?  How do we support each other's spaces?  How do we demand sustainability of those spaces, so that we can stop talking about moments and really understand how little we have been able to scrape away at and collect for ourselves in the grand scheme of things?”

— Joeonna Bellorado-Samuels, Founder of We Buy Gold and Director at the Jack Shainman Gallery, New York

“Wow.  The church!  The church.  Where else could we go?  What else could we do back when I was growing up? You know, the church was the center of everything that we did: socially, economically, culturally.  Youth pageants at Christmas. You had all of the things that we thought we were missing. They were all there.  Parents must have loved us so much that they made sure, and I guess it goes along with every generation, ‘I'm going to give my kids everything I didn't have.’ And if they gave us love, that was the greatest gift that they could give us. So, because we were going to go out and meet a world that wasn't so kind, they filled us up with that love: the church, the lessons, the parables that the preacher would give that you could live by, that everybody said, ‘Oh, that sermon lasted me all week, I guess I'll go back next Sunday and get filled up again.’ It was all of those things.  The revolution grew out of the church.”

“I grew up in a Baptist church in Detroit, Michigan called Tabernacle Missionary Baptist Church. For me, it was a site where I first learned about vulnerability through witnessing incarnation. This idea of spiritual possession. I learned about desire, about wanting to be touched by the holy spirit, wanting to be anointed with hands. Even though I identify more as agnostic and spiritual in this moment, so much of the Black church shows up for me in how I relate to the world. My exhibition [Enunciated Life] is very much concerned with that, and so much of the show is informed by the scholarship of Ashon T. Crawley who wrote about Black Pentecostalism specifically. He talks about queerness as a form of relation within the Black church and navigating a queer embodiment: the difficulties and the pleasures and joys that come along within the Black church space.  (Read Black Pentecostal Breath by Ashon T. Crawley)

“There's a scene in the film where Nikki Giovanni is performing with the New York Community Choir. She's performing this extraordinary piece that many of us are familiar with, from her spoken word album, Truth Is On Its Way. She talks about how she grew up in the Baptist church, as well.  The church was everything she knew, but as she emerged as an artist, she also wanted to push back. I love seeing that performance when Bennie Diggs––shout out to Bennie Diggs! Bennie Diggs has these wonderful choir members from Harlem, singing this piece by James Cleveland, ‘Peace Be Still.’ Yet, you're hearing this profoundly, almost antagonistic, belligerent, beloved, insistent, raucous poetry that is completely the antithesis. Then you realize––‘Wait a minute. It isn’t.’

Ellis Haizlip created that opportunity because [Giovanni] was raised on gospel and wanted to have her poetry [set] to gospel. Many people don't know that was [Ellis’s] idea for that album, which became iconic. He also helped to produce it. [The album] is born of this idea of always creating that duality for his artists to express themselves in ways in which, yes, they're informed by the church, they are in love with the church, it’s part of who we are, but we engage with it differently and we have the right to have that position.”

Building Institutions Despite the Odds