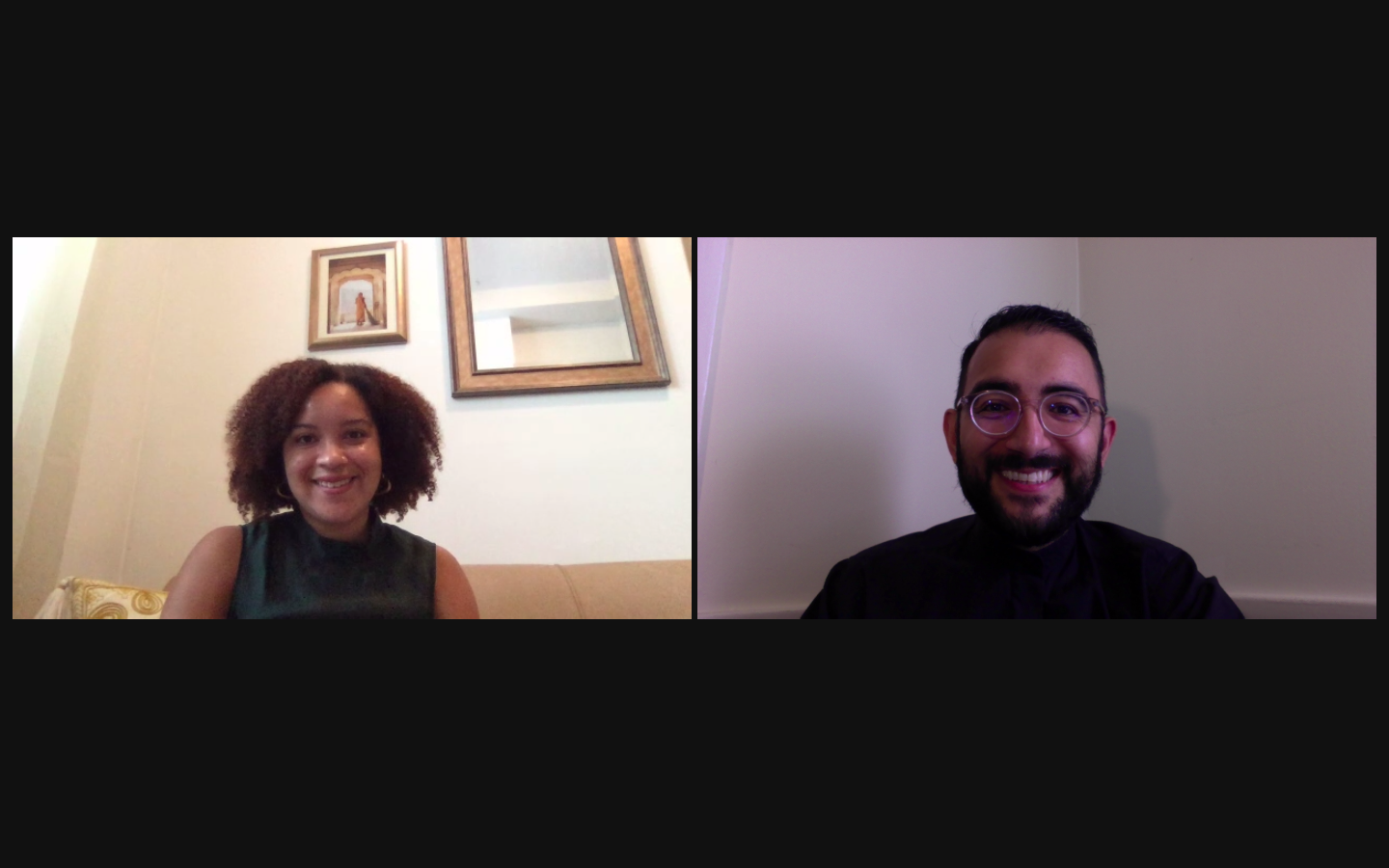 Studio Check-in was born from a desire to tell the stories of the people that work behind the scenes at different arts and cultural institutions. Institutions are defined by the people who work within them, but they are equally defined by the community members, artists, and audiences that intersect and support the work and mission—different audiences and participants help make the story more full, more human, and more alive.

In this Studio Check-in I speak with Adeze Wilford, currently an Assistant Curator at The Shed. Adeze is a Harlem resident, former intern, and a participant in our inaugural joint curatorial fellowship between The Studio Museum in Harlem and the Museum of Modern Art.

Adeze, thank you so much for taking the time to speak with us! My first question is always an introductory one to set the stage. Can you begin by telling the readers a little about yourself, please?

Hi Ilk, I am currently a curator at The Shed. When I'm not working I like to spend a lot of time in museums and gallery spaces. One of my favorite things to do when I travel is to check out a museum I’ve never been to before. In addition, I like to keep myself creative, and while I am not an artist or maker by any means, one of the things that has been healing for me, especially during the pandemic, has been reinvigorating this embroidery practice that I have. I like to make cheeky embroidery that references hip-hop lyrics because a lot of the time embroidery is seen as an elderly craft but I like to bring in a modern twist to it.

So what was the last one that you made?

I’m really bad at Photoshop but I figured out a way to create something on a shirt that is an ode to LL Cool J. It's two door knockers and it says “around the way girl.” It’s a work in progress.

Love it. I’m trying to imagine what it would look like to bring back the one rolled-up pant leg as a style. I don’t think it’s as cool now if we brought it back.

I don’t even know if it was cool back then but we let him get away with a lot.

Most recently you organized Howardena Pindell: Rope/Fire/Water. Big congratulations on the show! Is there a particular memory from that exhibition that resonates with you?

That was one of the biggest exhibitions I’ve done in my career, and working with one of the most renowned painters in several generations. You have this anxiety when you meet people you deeply admire in real life, and you hope they live up to the expectation of who you’ve built up in your head. Howardena Pindell exceeds any expectation you could have of her—she’s one of the most wonderful, deeply caring, deeply thoughtful people I’ve had the pleasure of knowing. The exhibition went down in the early spring but we communicate all the time.

That is something I feel is really special and amazing. It speaks to who she is as a person. We catch up and speak on the phone, and talk about each other’s days. That is an incredible thing I have—this person who opened the door for people like me to be able to walk into other institutions; she's just so generous and so kind. It has been so special for me.

As you have said and written, Howardena Pindell is an American painter and filmmaker, but she is also an archivist, critic, and activist. You’re a curator, but what other titles would you like to be described as or be regarded for?

It took me a long time to physically call myself a curator even though I was in those spaces. I hadn’t had a big show yet and I was wondering if I could even call myself that. I had a conversation with someone I used to work with at Studio Museum while I was there and she said I can one thousand percent call myself a curator if that’s what I’m interested in doing, and that's what I should call myself. But something more recently I’ve been trying to explore through the lens of my curatorial practice, but also in general, is writing. I’ve been lucky to be able to explore that a bit more this year.

This year you were named as one of the Queens Museum’s Board of Trustees. Major applause on this rarified achievement! What excites you about this new opportunity to be in executive-level conversations within arts and cultural institutions?

Thank you. It’s really exciting! They were doing this open call for younger, more emerging voices in the arts. Throughout the entire process I was wishing I got this opportunity because it seemed so exciting.

The Queens Museum is a bit of an iconic space. If you grew up in the New York area you’d go to it on a field trip. You’d go see Panorama and it’s a thing. It’s nice to be able to turn the focus and see what an institution that has a real community focus is doing, and, especially during the pandemic, they’ve done such amazing things.

So it was really exciting for me to get to know a little bit more about what their major five-year plans are and all these things they’re doing. Speaking personally, I have aspirations for a long career in this field and so I wanted to do things that would help me learn as much as possible and as many different skills as possible, not just hard skills at work, but also other opportunities to understand the real inner workings of a museum space. Especially because where I'm working right now is not a museum space, and while it’s really exciting to be there, my heart is always going to be in a museum context. It was important for me to have those skills for later down the road, to hopefully put them into practice.

Where did you grow up?

Originally I’m from Harlem but we moved to the suburbs to New Rochelle, so it's about thirty minutes away by train. I was always here because most of my family was still here. I'm physically in Harlem too, where I live, but I am from the greater New York area, the 914. I very much claim Westchester County, I’m not one of those kids who claim to be from New York City. It doesn’t count if you leave when you’re three years old. I'm a New Yorker in a specific context that’s not necessarily from the five boroughs but very close to them and have spent a lot of time growing up here.

Speaking of Harlem, the Studio Museum played an early role in your career trajectory. You were an intern in 2014 before working as a Public Programs and Community Engagement Assistant in 2015. Let’s go down memory lane for a second to those days. Is there an artist that reminds you of your early days on the come-up? Maybe someone you met or learned about as a result of working at the Studio Museum?

I was the department assistant in Public Programs, and interned with Edwin Ramoran and eventually worked with Nico Wheadon when she was manager of the department. I was at Studio Museum when Naima Keith, Thomas Lax, and Lauryn Haynes were there, and also partially when Amanda Hunt was there, so I had a lot of different curatorial styles to see from afar as someone in Public Programs. But we worked very closely with the Curatorial team to plan supplemental programming for their exhibitions, so I would be very present. One of the artists who was interesting to engage with and get to know was Trenton Doyle Hancock.

After your time in public programs, you became a curatorial fellow in the inaugural Studio Museum & MoMA Fellowship program from 2015-2017. For those that may not know, this is a unique program that places fellows at each institution for a year, giving someone exposure to two different scales of labor within the arts and culture sector. Is there a lesson or skill that you learned in those early fellowship days that still resonates with you as a curator today?

One of the things that was helpful about the fellowship is [learning] the nimbleness you need to navigate different spaces. Studio Museum was always such a tight-knit staff and you become part of this Studio Museum extended family, so even when you leave you’re always clued in to what’s going on. We all have this Studio “we” that we still use. I’ll be at work at The Shed, and I’ve been working here for three years now, and mention something related to Studio Museum and say we, and I’m like wait a minute and hold on. That’s very much a part of the culture.

At MoMA the scale is much more vast than what Studio is. I’d be emailing someone for weeks at MoMA and never have met them in person. And so that is a very different way of navigating a workplace but it's not better or worse, just different to be able to have both of those skills so going forward I’d know how to navigate from that smaller space to the places that are more regimented and scaled-up.

I love the word “fellowship” because I think the core of the word is imbued with a sense of togetherness, community, and comradeship. Who is someone that you wish you could be in fellowship with today, someone who you haven’t had the chance to meet yet?

That's an interesting question because you could easily go with people who are no longer with us. I am very lucky so many of the people I wish I could get to know through this work are people I do actually come across. One of my favorite things about working with contemporary artists is you have access to real-time answers to questions.

Most recently I quoted a lecture Toni Morrison gave in the text I wrote for Howardena’s publication and I would love to have her perspective on what's happening right now. I think she was so smart about the way that she talks about Blackness and the way she engaged with race. Given everything that’s happened in the last five years but also given everything that happened with the spring of 2020, I do very much wish I could have a conversation with her about how to navigate these very intense political moments we’re in without losing the artistic rigor we all want to have. It’s very easy to focus on something in front of your face and impacting your community to a point where you lose sight of the work you're supposed to be doing and I'd love to have a conversation with her about ways to navigate that.

It's fall, when New York starts to really change up its energy. Got any exciting things to look forward to in the coming season ahead?

We’re opening up a new commission of work by Ian Cheng. The exhibition features a  large-scale screening of the narrative animation that’s coupled with an interactive “World Watching” presentation of the animation that allows viewers to freely explore the details of the world Cheng’s created at their own tempo.

Adeze, thank you so much for taking the time to speak with us!