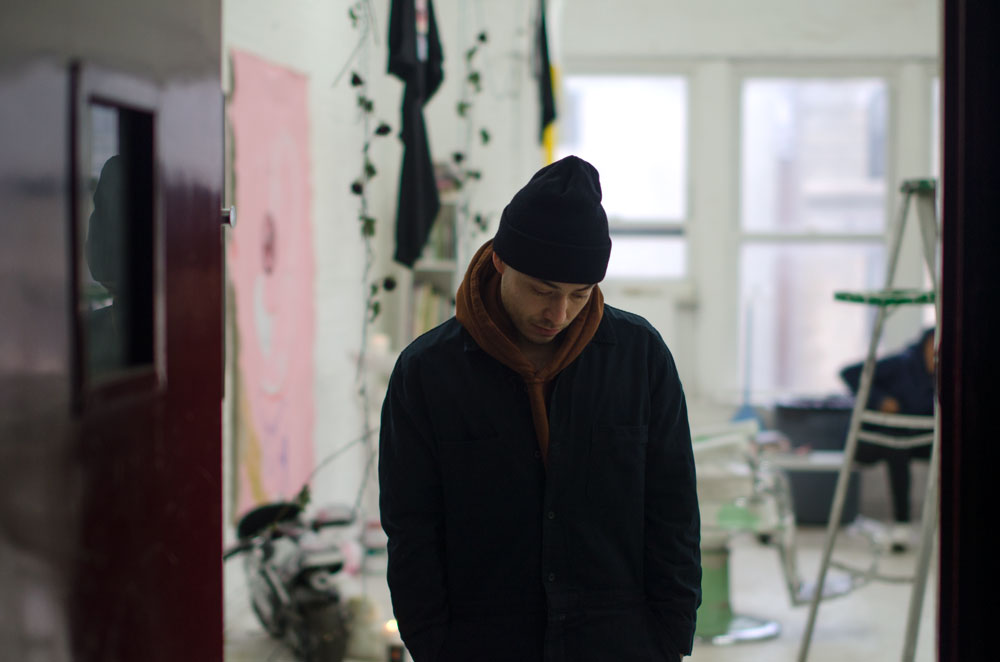 The artist Gogy Esparza in his studio.
Photo: Sasha Jelan

The influence of colonial powers in the nineteenth and twentieth centuries contributed to the idea of art as exclusive, a commodity, created by acquired skill, only recognized and valued through the approval of an institution. As a result, generations of American artists were marginalized, unable to join academia and, therefore, unable to profit from the network of an institution. While some African-American artists—notably writers James Baldwin, Langston Hughes, and Richard Wright—became successful by journeying abroad, where racial tensions were lower, many others, such as Sister Gertrude Morgan and James Van Der Zee, went unrecognized until the end of their careers, or their lives.

Through various efforts, such as the civil rights movement, the act of integration, affirmative action, and financial aid, Black and brown artists today have been afforded the opportunity to pursue the arts academically. They also have increased chances at institutional success through following the traditional route of earning a degree, gaining gallery representation, showing in museums, and developing a steady collector base. While this formula is promising, mixed-media artist Kyle Castro and photographer and installation artist Gogy Esparza are among a new generation who dare to redefine success and how it can be attained. These emerging artists are following in the footsteps of self-taught, outsider artists who have been making art for centuries. Not long ago, I sat down with them to learn more about how they navigate the art world.

Sasha Jelan: Tell me about your background. Where are you from and what kind of education did you have?

Kyle Castro: I’ve been creating my entire life. As long as I can remember. Nobody ever told me to do it, nobody ever really encouraged me. It’s something that I always did and I knew that it was something I liked. There is a website called Deviant Art and that’s what started me creating as much as I did when I was younger. I would post things when I was only nine. People could follow you, it was like an early Instagram. I stayed online heavily from 2010 to 2013, and I remember in 2012 they released Instagram. I always used it to joke around.

Around 2015, I started to see this generation doing what they do and it inspired me and made me realize that independence in art is a thing. I can independently represent myself, as long as I know how to market myself. At that time, I was not going to graduate. I didn’t go to school when I was supposed to go. I would go to school and not go and it got to the point where I was able to graduate, but I just did not take that opportunity. I was thinking to myself, “What am I going to do with my life?” I just centered myself.

Gogy Esparza: I’m Ecuadorian, and my family immigrated from Ecuador in the 1980s. I was born in Worcester, Massachusetts, a big industrial town with a lot of factories and predominantly working class. We all lived in a one-bedroom apartment in a housing project called Plumley Village. It was like twelve of us in that apartment—my aunts, uncles, and cousins.

I went to a diverse school. Everyone, for the most part, was in the same economic bracket and I think that bred an open mind. Growing up Ecuadorian, you don’t really feel American, so you adopt customs. Inevitably, I was product of 90s hip-hop. I was in the barbershop a whole lot, I would go there after school. The barbershop is like internet before the internet. You hear everything, music, sports, style—that was my upbringing. I first came to New York young, I’m talking five years old. We were walking through Times Square and I told my mom, “I’m moving here.” That’s what made me want to get out early.

SJ: When did you realize you were an artist and that what you were doing is art?

KC: Around sixteen or seventeen. I began looking at things more as pieces, representing conceptual ideas.

GE: In the hood, it’s like sports and music, but you don’t think you can be an artist. I didn’t even know what that was until I was nineteen or twenty. I was still thinking commercial.

SJ: How did you begin to learn a practice?

GE: I wanted to study fashion design. I got into Parsons, FIT, and Pratt but they didn’t give me any money so I went to NYU, where I got a large scholarship. I was downtown, and into the creative culture downtown. I met a photographer from the Bronx who photographed all the quintessential New York hip-hop culture, and I asked him if I could assist him and he let me. He said I should get a camera and mess around and that’s where it started. I also worked for the photographer Mark Borthwick. His home was a sanctuary, he had a tepee in the middle of the room with incense burning. He had collages and would be cooking for you and reciting a poem. I’d never seen an artist. He was so tapped into his world and that changed me. I started taking photography seriously, taking photography and film courses for two semesters. 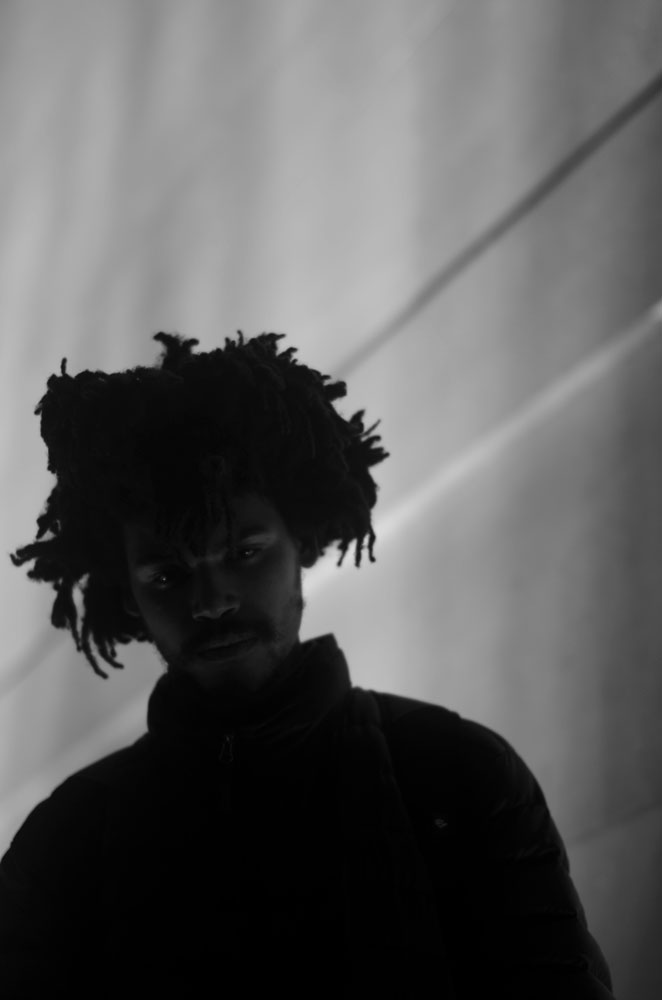 "My practice is the only place where there are no rules."

KC: Boredom. I slowly began to realize that there are no rules or constraints to what I can do. I can be an interior designer or a rapper. It wasn’t until I began looking into everything that I understood it’s all an art form. I understood versatility is the future. There’re no more one-trick ponies.

SJ: How were you introduced to or inspired by self-taught artists of previous generations?

KC: Sister Gertrude and few other artists inspire me. The first artist I learned about was Salvador Dalí. The reason I respect him and anybody who came after that period is that they were really challenging the idea of art. I’m interested in their journeys, how they came to be and how they rewrote the rules of art. They propelled things to where they are today. I think that period is so interesting as well because that’s when art really became a commodity, and it became an ego. It’s no longer just representing Christ and these ideas—you’re representing your own ideas, your own self, and the public wants a piece of you.

GE: I studied abroad in Madrid my junior year, I was nineteen and there I took a Surrealism course, art history, Dadaism, and our classes took us to museums like the Prado and the Reina Sofia, where we learned about Dalí, Velazquez, and Picasso. For me, Surrealism was like hip-hop and I identified with that. They were very rebellious against the institution of art that was in place. They changed things, and when I finally realized it I felt like I could do that, too. I would stand in front of these paintings for a long time and feel, “I know I can do this.”

SJ: How did you begin to collaborate with others?

GE: I saw kids getting busy and I was like “Yo, come have a show here!” When I opened up the gallery, it was very beautiful. People don’t know how hard this is. I took out a loan, cutting hair seven days a week, to be here. I made amazing friendships. I was having an open dialogue and sharing my space.

KC: I didn’t have a place to stay, so out of necessity I began to sell my work outside. Washington Square Park was the main spot I’d been hitting for those years that I was doing that. By staying in the street I met a lot of different people, and they came to me with opportunity.

SJ: How do you navigate an art world that still views you as “other”?

KC: My practice is the only place where there are no rules. That’s the only place I can really be myself. I put myself there and I’m free to do whatever I feel—it’s satisfying.

GE: The Spaniards colonized Ecuador and so you’re force-fed Catholicism when you’re young. As an Ecuadorian immigrant in this country, not only are you Catholic and always feeling guilty, but you are now a lesser-than, you are a worker. You’re a working-class minority with a stigma attached to you. Inherently, I felt docile. I felt like I couldn’t do anything, and my heroes were always Black because I grew up in hip-hop and in the projects with these people, everybody at the shop is predominantly Latino and Black. Where is the contemporary voice for this narrative?

Kids don’t usually get to go to NYU on a full scholarship, especially from any ghetto or hood. I felt I had to take what I learned and introduce a different texture to this conversation. We need to have that dialogue and challenge the way we are perceived. America is not used to a certain narrative. I want to keep knocking down that door.

SJ: How do you determine value?

KC: It depends on the experience in my life that the piece pertains to. All of my work is a reflection of my life. If I feel like it is personal, I would never sell it. I’ve turned down people before because a piece is so personal to me, so valuable. I’m my own art collector.

SJ: What challenges have you faced as a result of your nontraditional routes?

GE: The hierarchy of art is preset, impenetrable. As a person of color, who is not being a token, you have to work extra hard. There is still a perception of what a Latin American artist looks like or what my work is supposed to be like.

KC: I feel like I missed out on my youth and allowing myself to let loose. I always put a strain on myself, since I was sixteen, about where I was going to be. I did meet a lot of different people through this and the common interest is always art. I’ve been able to talk to people I’m inspired by and respect highly—that is something I gained. 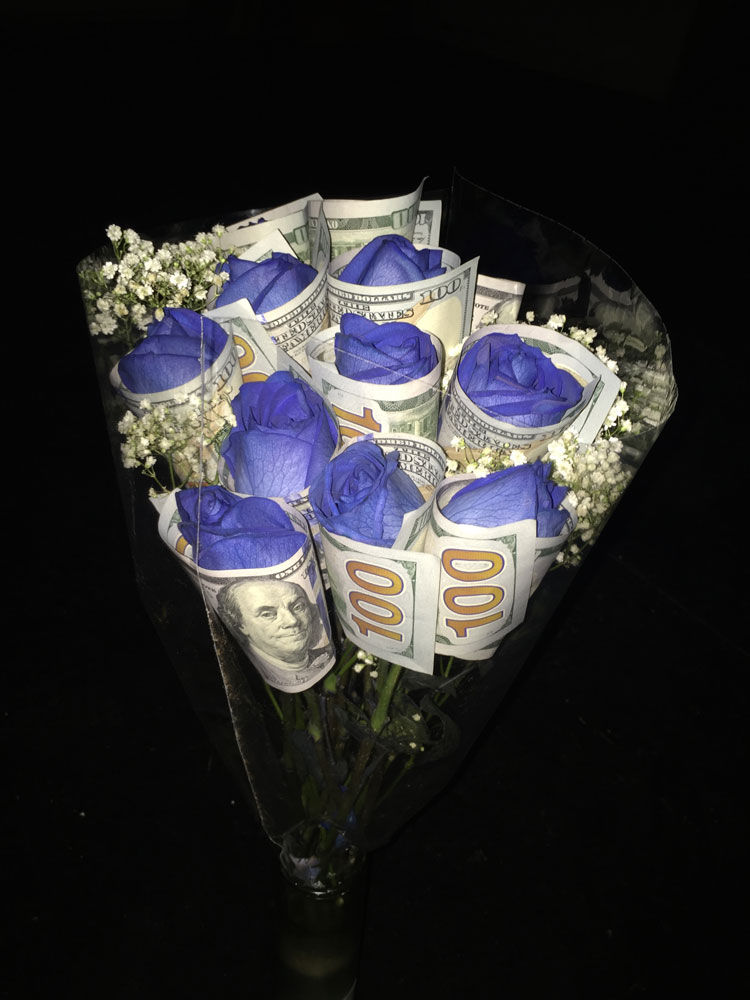 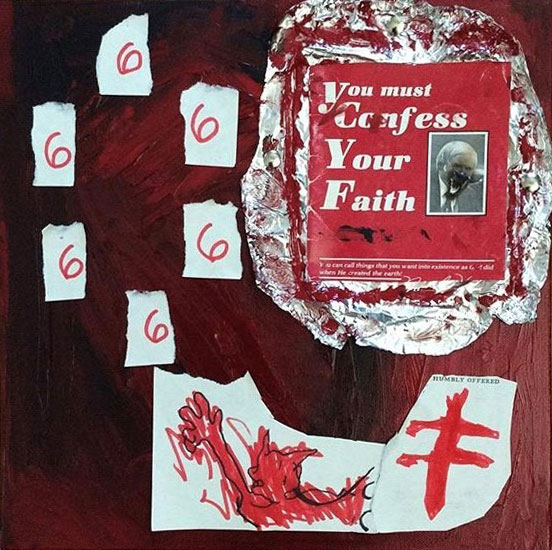 Gogy Esparza
Protect me from myself, 2016
Courtesy the artist

Kyle Castro
in the hellish realm, all I can do is regret, 2017
Courtesy the artist 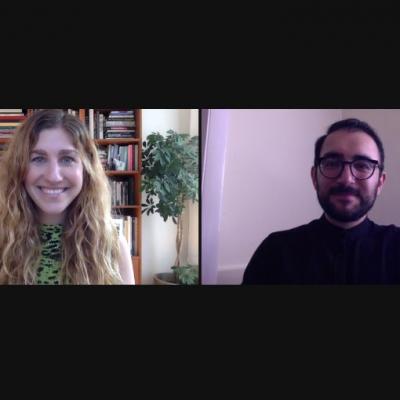 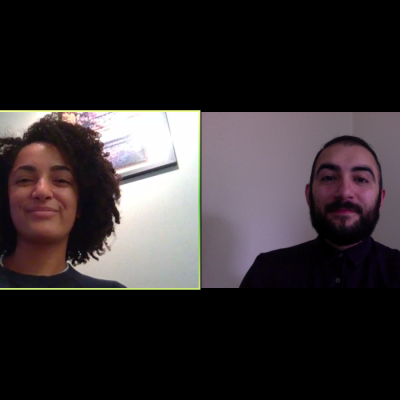