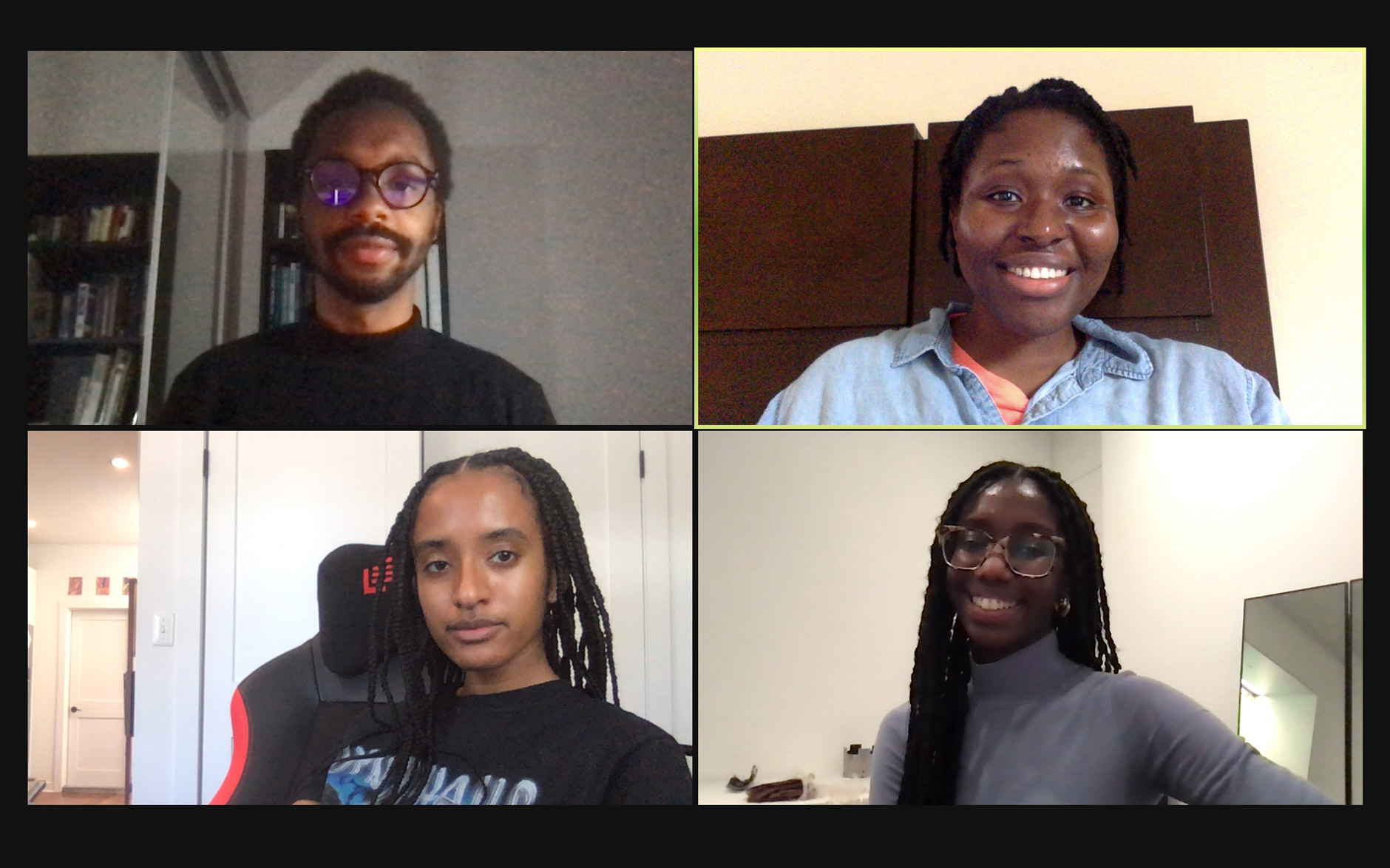 As a form of narration, the curatorial tradition has long been structured by colonial ideologies. These legacies continue through the role of the curator, which is deeply saturated by race, gender, and nationalism in an attempt to render it exclusive, objective, and individualist. Curatorial strategies for narrating and displaying objects and information may be taken up by curators of all backgrounds, even from positions or utilizing subject matter antithetical to this framing. As colonial legacies are deeply imbued in the structures of these institutions, we see careful attention to the practices and strategies of the curator as imperative. As Black curators in opposition to the master code of a singular narrative, we depart from this position to disrupt the role of the curator and open up alternative strategies for narrating the past, present, and future from a multitude of vantage points.

Toward a Narrative of Disaccumulation1
Anisa Jackson

Historically, museums and world fairs have pushed narratives to support the racialized expropriation and cultural dispossession of ongoing colonial expeditions. These legacies continue: Museums remain on stolen land, withholding stolen objects and human remains. Considering how racialized discourse and violent accumulation have influenced curatorial practices and strategies, what role could disaccumulation take within the curatorial? While this can include land repatriation and return, what might we consider a “narrative of disaccumulation”? If our task is to unsettle the overrepresentation of a singular narrative rendered as objective, we might instead use the curatorial to create a friction that pushes up against this master code: the singular narrative that is rendered objective and true.

When constructing an exhibition, a curator is engaging with narration through space and time, considering carefully the audience’s movement through a presentation and the presentation’s ideology. If the narrative, temporal, and spatial strategies employed are based in Westernism and the pursuit of modernity, what strategies exist to collapse them? Narrative dimensions of an exhibition might follow the strict bounds of a singular approach or archive, or they might ask the audience to challenge the bounds of a singular narration—to go beyond the curator’s enclosure. In the multiplicity of memory and perspective, the curatorial project may never be fully complete, but it can still offer space for iteration. The colonial, imperial, and liberal archive has considered Black and Indigenous people as being without place or history. Rather than entering curatorial strategies complicit with this framing, we might instead form an alternative dialectic that pushes against the master code and sings from the chorus. The chorus, as Saidiya Hartman evokes in Wayward Lives, Beautiful Experiments, offers a “vehicle for another kind of story, not of the great man or the tragic hero, but one in which all modalities play a part.” To sing from the chorus, then, is to tell history against the progressive timeline and hierarchical form of the enclosure, and advance a series of speculative arguments that might create space for the audience’s agency, embodied experiences, and errant pathways through an exhibition, while also providing tools to analyze the archive’s rhetoric. To push for a narrative of disaccumulation is then to demand multitudes.

1. I use disaccumulation here to consider activity that is in contradiction to capitalist expropriation.

Like with many curators, the pandemic paused many of my projects. Previously, so much of my work was about moving very quickly and keeping up with the demands of an overwhelming exhibition schedule. Finalizing checklists and labels, editing intro panels, and planning rigorous public programming became the essence of my job. Prior to the pandemic, I began work on three exhibitions, which examined histories of slavery, colonialism, diaspora, and repatriation.

One of the exhibitions, which is a reinstallation, grapples with the legacies of slavery and colonialism in relation to works of seventeenth-, eighteenth-, and nineteenth-century portraiture and decorative arts. When asked what I hope people will walk away with once the exhibition opens, all I could say was to be haunted, to sit with this unsettling history, and to bear witness. In the article, “Working with Histories that Haunt Us,” writer Marius Kothor reflects on what it means for her to write the history of her native Togo as a refugee. Inspired by the work of historian James Robins, who asks, “Can historians be traumatized by history?”, Kothor examines how her grief pushes back on History’s “disciplinary fantasies of ‘objectivity,’” and prompts a reflection on how affective responses to specific historical events can be used as a form of knowledge when dealing with traumatic histories.

In reflecting on our conversations in the Museum Professional Seminar and Kothor’s article, I began to think about what it would look like if our curatorial practice involved "haunting." According to the work of the late Ross Chambers in his book Untimely Interventions, "critical work has personal underpinnings and entails emotional investments that can’t and shouldn’t be ignored.” It is important to bear witness to the stories and histories of mass violence and trauma in the face of a culture that 1) seeks to deny the existence of pain and trauma and 2) is persistently haunted despite the denials. To welcome the haunting with "hospitality," as Chambers says, it is at the heart of the "critical work."

To be a curator is to care for objects. Museums have historically portrayed themselves as repositories of knowledge and history. Through the use of artworks, texts, and facts, curators are stewards of this mission, presenting histories as objective, universal and disembodied (an institutional voice instead of a personal, more subjective voice). Historically, so much of our work centers the care of objects, and not necessarily care or duty of care to our audience beyond the presentation of factual information. With the effects of the pandemic and the movement for Black lives, the museum world and cultural institutions are being called to reckon with white supremacy and its byproducts (neutrality, universality, objectivity) that exist at our foundation. When grappling with these difficult histories, Black curators and curatorial staff don't really get to opt-out of this haunting, when our upbringings seek to center the experiences of the collective (the good, the bad, and the ugly). We don't have the luxury of operating as individuals, as neutral, in these spaces.

As a bookworm, I often find myself seeking refuge from the frustrations of reality through texts, books, and quotes. I fold myself into the spines of books by authors who look like me, authors who can walk alongside my convoluted thoughts until they no longer resemble their origins––authors such as adrienne maree brown. brown’s Emergent Strategy has remained with me since the first time I read it. I clung to brown's words during a time when my presence in white spaces surfaced feelings of alienation, and the limitations of my title within a large institution implanted recurring frustrations through not being able to create change on a large scale. In the book, brown defines “emergent strategy” as “a strategy for building complex patterns, and systems of change, through relatively small interactions.” As a Black woman in a predominantly white institution, as the only Black person in my curatorial department, as the first Black person to hold my position, disruption of complex patterns is the definition of my existence. My presence, my being, my showing up to do “the work” is, in and of itself, an emergent strategy. But presence without action is like faith without works.

Used in adjacent contexts, the word “emerging” is an adjective for one who is “becoming apparent or prominent,” often bestowed upon individuals such as scholars, curators, and artists. In what ways can a curator’s growing prominence in the field be coupled with the growth of new systems of change? Replacing the amorphous origins of the title with tools to reconstruct curatorial practice creates a subversive disruption to traditional institutional practices.

brown finds herself awakened to the potential scale of transformation that could arise from intentionally practicing this adaptive, relational way of being, on our own and in collaboration with others.

The first curator I knew worked outside of the formal conventions of the role. Growing up, the white walls of my grandmother's home in South Central Los Angeles were adorned with original gelatin silver prints that marked the arrival of my great-grandparents to the city in the 1940s. There was placement and care for familial objects created in friction with—and in many ways in refusal of—outside representations of what constituted Black life. This intention rests on a multidimensional plane, where space, time, and material converge to shape the experience of all who visit my grandmother’s home.

Although my grandmother would not identify herself as a curator, the notion of “the curatorial” is present in her attention to the familial archive. Coined by the scholar Maria Lind, “the curatorial” locates a praxis of  forethought guided not by consensus, but by an ever-present, non-locatable potential that grows with a fervent revaluation of how art is shared. Reflecting on the curatorial attention in my grandmother’s practice led me to consider how more expansive curatorial thought could have space in museum institutions. Emphasizing the notion of the curatorial as a function in institutions offers much promise in expanding beyond curating’s exclusionary roots that were, and still are, predicated on who is qualified to do such work. The shift from venerating the curator to prioritizing the curatorial can redefine the practice on equitable terms.

Supporting the curatorial within museum spaces would balance upholding integral aspects of care and creativity associated with curating without reducing the role to the same divisive qualifications that have excluded many for so long. The curatorial can be better understood as a methodology, a negotiation with the capacity to unfix existing power dynamics. Imagine how a museum space would change from welcoming curatorial thought from anyone—artists, educators, theorists, preparators, or patrons.

For some, focusing on the curatorial would signal a departure from what we’ve known curating to be. I welcome this departure, and museums should, too. We’d arrive at a point that extends beyond the fixed means of the curator as auteur, and create a platform where a diverse range of voices can be heard.

Supporting curatorial diversity comes with letting go of the curatorial tradition’s exclusionary qualifications and prioritizing the ever-present potential in creative thought within and outside of institutions. We offer the following questions to collectively rethink the possibilities of the curatorial: