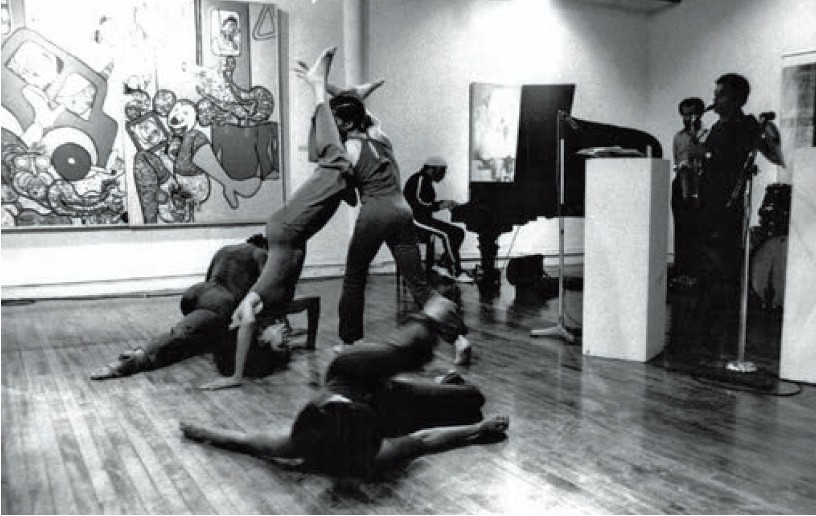 Dianne McIntyre founded Sounds in Motion in 1972, and celebrated its fortieth anniversary in September 2012, when the American Dance Guild honored her along with dance pioneer Elaine Summers. I invited McIntyre to discuss her art-making process in light of the potential impact of Sounds in Motion in the contemporary art world. The interview took place during the fall/winter 2012–13 exhibition season at the Studio Museum, coinciding with Fore and its collection of young artists who work in diverse media, often blending artistic practices in new and innovative ways. I am most intrigued by the presence of performance and dance artists in Fore, and the contemporary fine art practice in which media blend and disciplines cross, as well as how artists such as McIntyre—who have worked in a similar fashion since the 1970s—experience this work.

Katrina De Wees: You recently told me that Sounds in Motion was, for a few years, based at The Studio Museum in Harlem’s inaugural location at 2033 Fifth Avenue at 125th Street. How did your relationship with the Studio Museum form?

Dianne McIntyre: I think we were at the Studio Museum from 1976 to 1978. It was two or three years in the late 1970s. I do not remember how we got there, though. In that era, there was a network of Black artists. We all just knew each other across disciplines—the theater people, the dancers, and the visual artists. I don’t know if it’s like that now. We all knew each other and supported each other. It was natural. We were expressing the inner world and the outer world of the Black consciousness of that time in a unique way. Each person had his or her own voice, helping to advance the energy, freedom, and creativity of the Black community—community meaning the whole world. Nothing we did was conservative. It was quite bold.

KD: What brought you to the Studio Museum at that time? Were you interested in the physical space, or was there another advantage of working inside a visual art museum?

DM: It was exciting to be working inside a museum. It was exhilarating for me! And, in a practical sense, it was a bigger space. It was very expensive. The community honored the Studio Museum, and it was a divine location for us. The space was spotless. We had to be very careful because of the kind of work in our classes. In dance, you go across the floor and do your combinations across the floor. Sometimes people were flailing across with leaps. People would always catch each other going across the floor to protect the artwork. I didn’t notice it at first, but I would take on the moves or themes or energies or colors of the work exhibited. It was all around me. We had no mirrors. Our mirrors were the paintings on the wall. Sowe reflected those.

KD: How has Harlem influenced some of the things you were creating?

DM: It was the vibrancy and the energy on the avenue, people selling things on the street, the junkies nodding out on the corner, the playing with the fire hydrants, and the feeling of neighborhood that I didn’t find in other parts of Manhattan. There was always music in the air, from boom boxes and windows. The whole community was really just like one dance. What also made me aware of Harlem’s influence was Talley Beatty, one of the master choreographers of the twentieth century. He was a person I idolized and later got to know him, which was such an honor. I allowed him to come to the studio to rehearse anytime. He came, and not to rehearse. All he would do is just stand and look out the window. He told me he would get ideas from watching people walk down the street, their interactions with each other and their heads, and the way they did their little bop walks. He could tell the stories that were transpiring between them by body language.

KD: In the essay "Moves on Tops of Blues," dance scholar Veta Goler mentioned that Romare Bearden was an explicit influence on some of your work.1 In what way have you been influenced by Bearden’swork?

DM: A few names I remember are Al Loving, Clark, and Valerie Maynard, who was a sculptor based in Harlem. George Mingo, Betty Blayton Taylor, Howardena Pindell, Charles Searles, and Melvin Edwards, as well. Frank Stewart, David Hammons, Betye Saar, Faith Ringgold, and Senga Nengudi. Senga and I did a collaborative work together, right before Sounds in Motionwentto the Studio Museum. Maybe she has something to do with us being there. I don’t know! The pieces that inspired me most were really big in size. And they were bold, crossed between abstract and realism, Black Power and mysticism. That was the Black Arts Movement. The work was bold and metaphorical. When I was at the Studio Museum the whole exhibit was about caskets. During that period, I did this piece called The Voyage about the Middle Passage. A lot of the power of the piece came from that exhibit. I choreographed it at the Museum. I had to use extra energy during that period. In The Voyage, the people had chains on their legs. There was hopefulness to it because they would break out of the chains. They would dream about freedom. It was abstract and colors and geometric shapes. Also, the shape of the sculpture was a big influence on me. I liked to create sculptural movement, and when there were sculptures on the floor, we had to be very careful about how we moved through space. It influenced my own tradition of making shapes.

According to Time Out New York, Dianne McIntyre is one of modern dance's reigning divas. She has been an inspirational force in modern dance for four decades as a performer, choreographer, and teacher or work in concert dance, theater, film, and television. McIntyre’s choreography has been on Broadway and in screen classics Beloved and Miss Ever’s Boys, which received an Emmy Nomination. Other awards include a Guggenheim Fellowship, three Bessies, and two AUDELCOs. She choreographed Ntozake Shange’s why I had to dance at Oberlin College and the Nina Simone Project for Dallas Black Theater in 2011.