The 2018 Artists in Residence

Tschabalala Self (b. 1990, Harlem) makes syncretic use of painting, printmaking, and assemblage to explore ideas surrounding Black female bodies. Constructed with a combination of sewn, printed, and painted materials, her exaggerated depictions of figures traverse a variety of artistic and craft traditions. But the work is not “about being Black—it’s about these people who just happen to be Black,” she said in an interview with W Magazine last January.

The physiological and psychological characteristics of her figures reflect her personal desire to articulate cultural attitudes and realities as they relate to race and gender, through people who exist but may not always have been represented. Self lives and works in New York and New Haven, Connecticut. She received her MFA from Yale University and her work has been included in exhibitions at Tramway in Glasgow, the New Museum, and The Studio Museum in Harlem (A Constellation, 2015–16).

What has changed about your practice in the last year?
My practice has become more concerned with my personal history rather than my personal feelings. I have a greater interest in unpacking the nuances of the communities and environments I have physically been placed within, rather than more esoteric concerns surrounding the psyche.

Describe Harlem to someone who has never been.
Black Mecca.

Allison Janae Hamilton (b. 1984, Lexington, Kentucky) is a visual artist working in photography, video, sculpture, installation, and taxidermy. Using land-centered folklore, her family’s own hunting and farming rituals from rural western Tennessee, and passed-down mythologies, she creates immersive spaces that consider the ways that the American landscape activates concepts of “Americana” and the social construction of space.

Specifically, she explores rural concepts of Blackness, which she says are “often left out of the visual discourse completely or depicted as archaic, anti-contemporary, and part of a painful past.” Hamilton was born in Kentucky and raised in Florida, and she now lives and works in New York. She received her PhD in American studies from New York University and her MFA in visual arts from Columbia University. She has exhibited at museums and institutions such as the Museum of Modern Art in New York, the Smithsonian National Portrait Gallery, the Jewish Museum, Massachusetts Museum of Contemporary Art, Fundación Botín, the Brighton Photo Biennial, and The Studio Museum in Harlem, where she was one of nineteen emerging artists included in the Museum’s fifth “F” show, Fictions (2017–18.)

What has changed about your practice in the last year?
I come from a family where many of the women—my grandmother, great-grandmother, aunts, and elder cousins—have been hunters and farmers. This year, I’ve been exploring these matrilineal connections to land by collaborating with my mother and other relatives in a performative way, mainly in video, sound, and photographs.

Describe Harlem to someone who has never been.
It’s America.

Sable Elyse Smith (b. 1986, Los Angeles) is an interdisciplinary artist, writer, and educator whose practice considers memory and trauma. She works from the archive of her own body to mark the difference between witnessing and watching. “To see,” she writes, “is unbearable.” Her prolific writing practice is intricately woven into her artwork.

Along with large-scale neons comprised of original texts, she authored LANDSCAPES & PLAYGROUNDS in 2017, and her writing has been published in Radical Teacher, Selfish Magazine, Studio, and Affidavit. Smith earned an MFA in design and technology from Parsons School of Design and is now part-time faculty there. She recently served as a visiting critic at Columbia University and is currently a visiting artist at Virginia Commonwealth University. She lives and works in Richmond, Virginia. Smith’s work has been presented at institutions such as MoMA PS1, the New Museum, the Queens Museum, and, recently, The Studio Museum in Harlem, where she was one of nineteen emerging artists included in the Museum’s fifth “F” show, Fictions.

What has changed about your practice in the last year?
This past year I’ve been thinking a lot about architectural scale and how certain objects, interventions, or specific gestures dominate space and choreograph bodies. I’m always making in response to spaces in those sort of subtle, idiosyncratic ways that are poetic to me, like my own inside joke, but more recently I’ve been directly dealing with the materiality of that “scale.”

Describe Harlem to someone who has never been.
My friend Simone says Harlem feels like the South. I agree with that. We met in Atlanta about ten years ago, so it’s a particular type of feeling I think we’re both conjuring. Harlem feels like home, even when you don’t know anyone on the streets. That’s really lovely to me. And then it vibrates. I’m happy to be back. 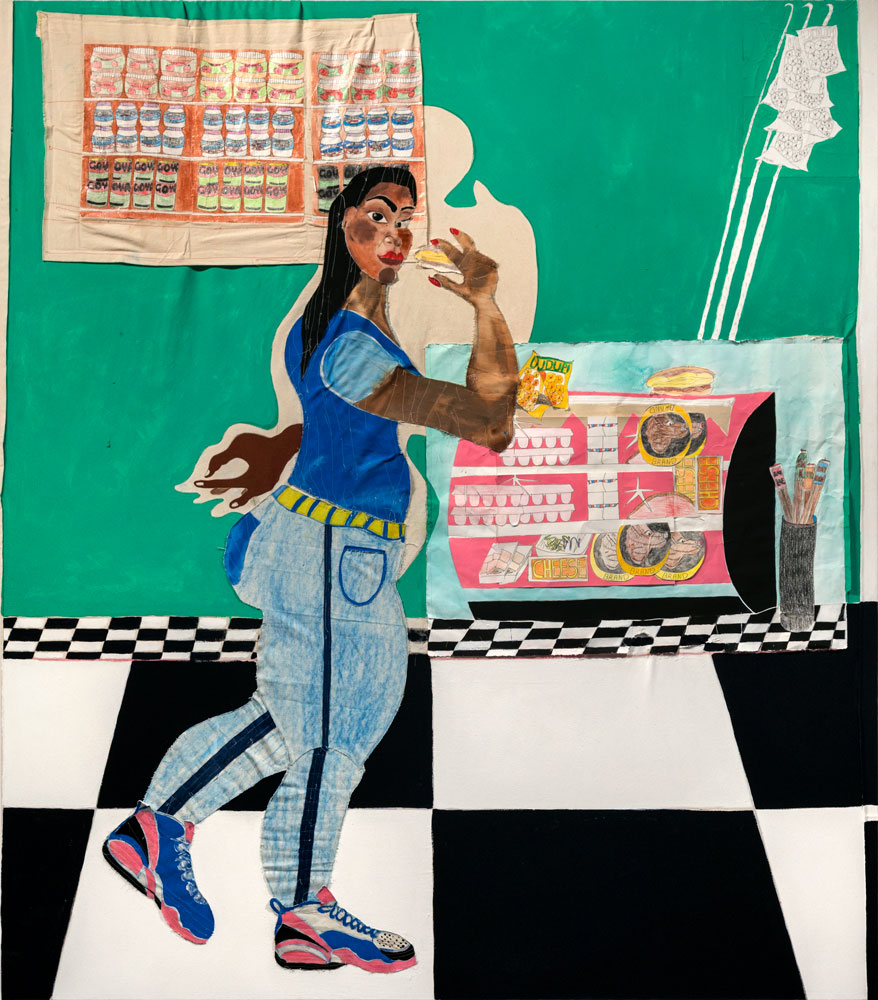 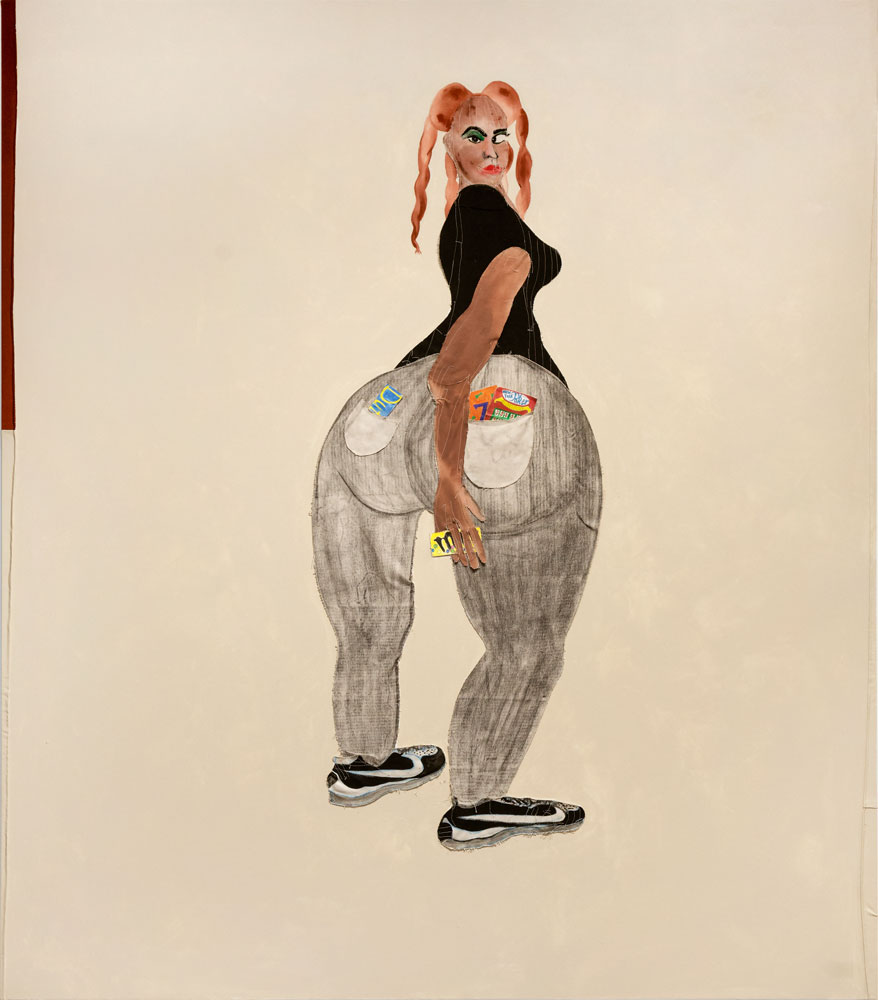 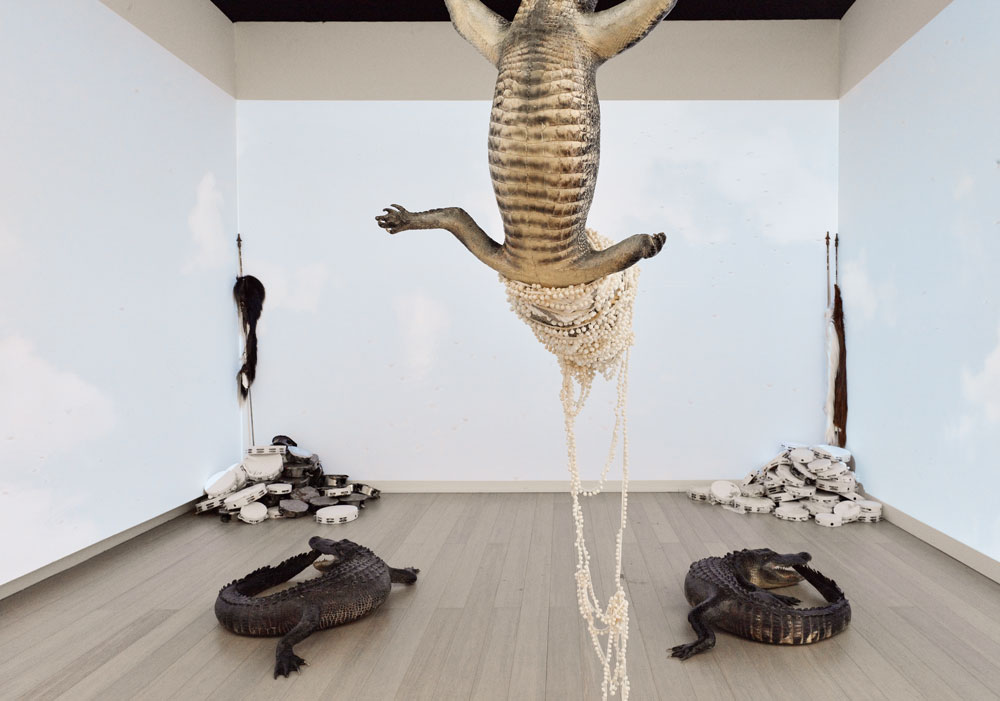 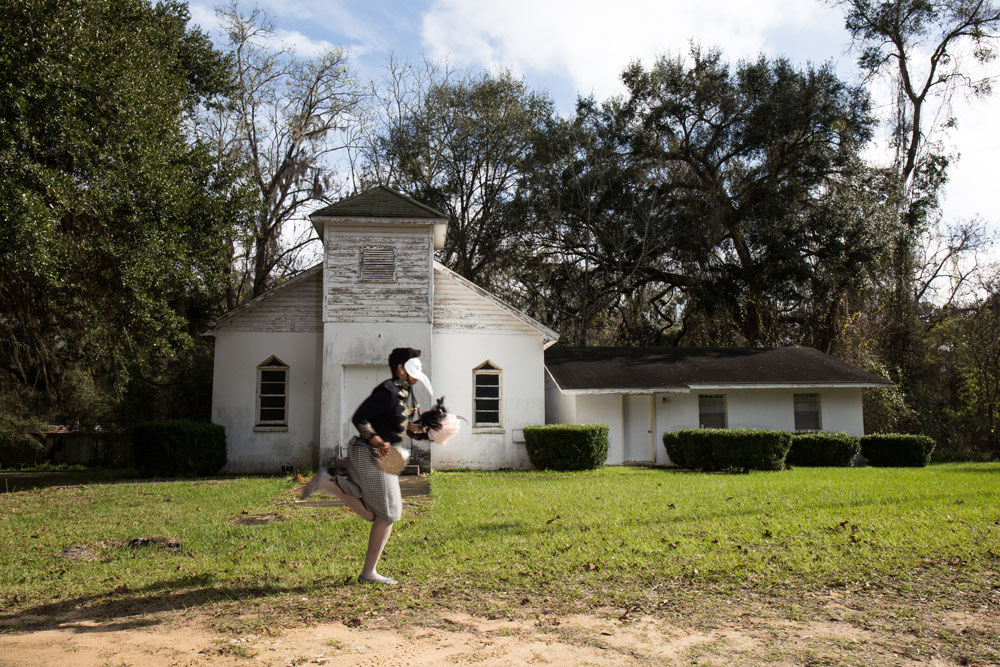 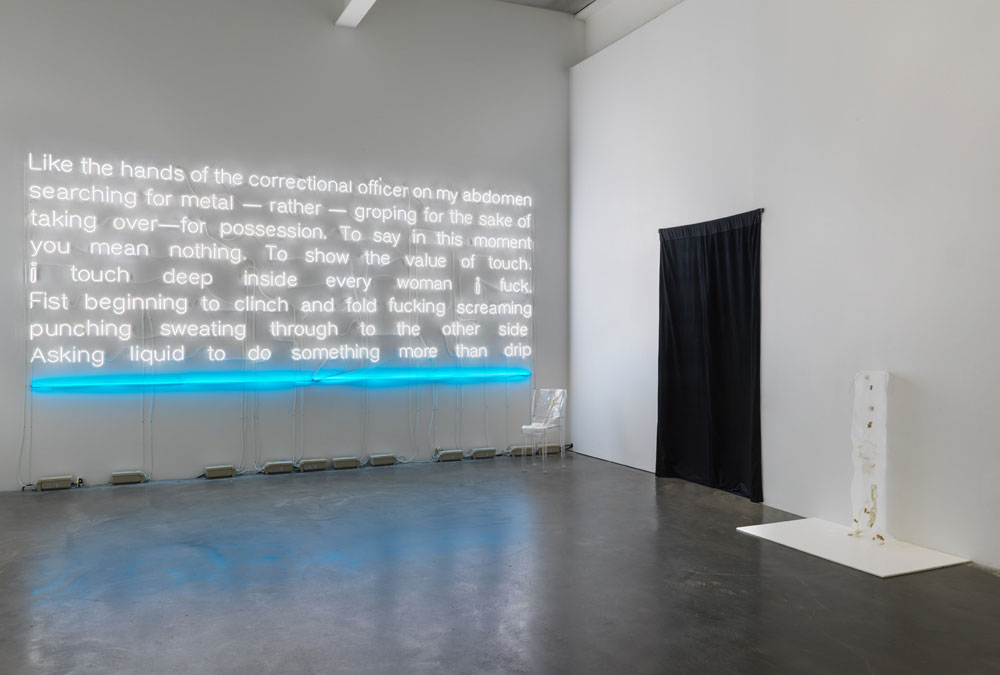 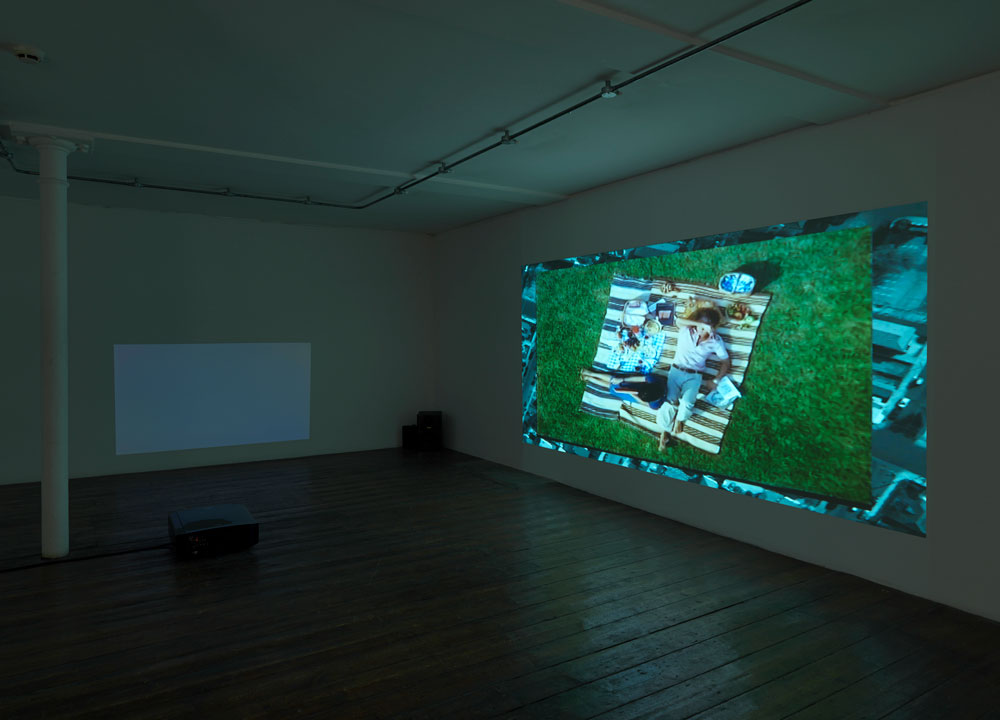 Tschabalala Self
Back at It, 2017
Courtesy Thierry Goldberg Gallery

Allison Janae Hamilton
Scratching at the wrong side of firmament, 2015
Courtesy the artist 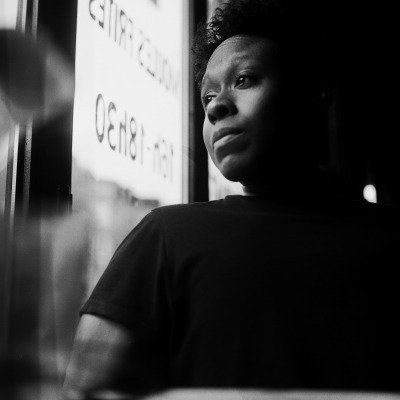 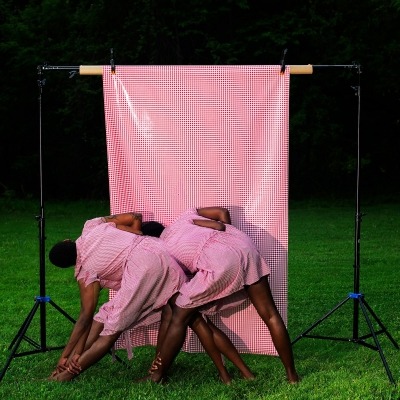 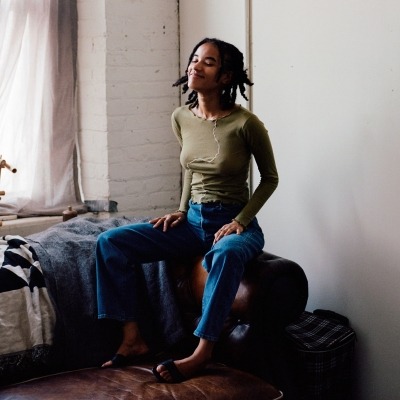