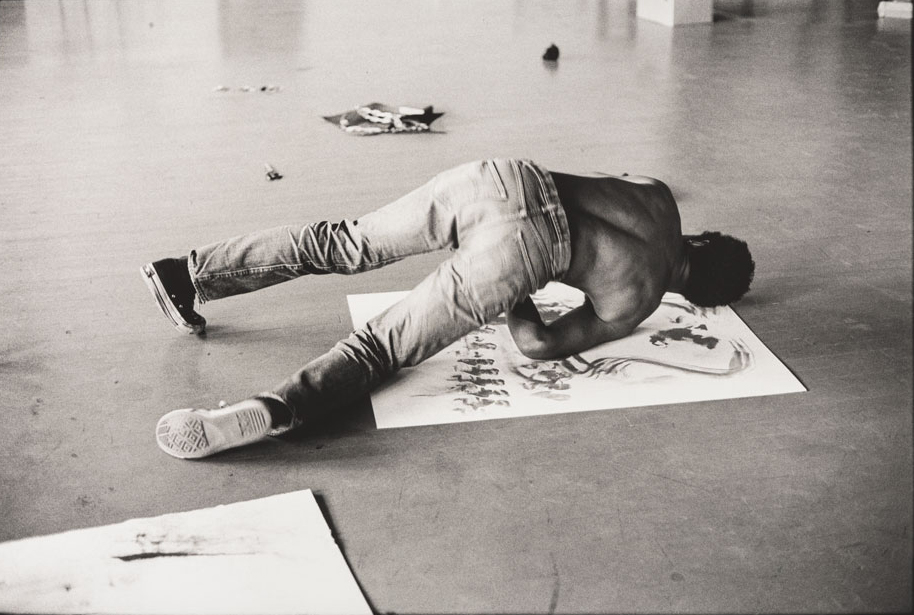 In 1968 David Hammons began a series of “body prints” in response to the artist’s frustrations with the 1965 Los Angeles uprisings. Following his series of abstract enamel paintings, which explored the palettes of the Black Liberation flag and those of independent African nations, Hammons’s “body prints” (produced in the 1960s and 70s) brought forth notions of self-definition while documenting the social, racial and political circumstances of his environment. Today, a new generation of artists are using their bodily presence as a form of art making and resistance, highlighting the marginalization and persecution that the Black body has been subject to throughout history.

Lubricating his skin, hair and clothing with margarine or baby oil, Hammons’s process required his leaning and lying onto various surfaces, and then dusting the charged areas with graphite or pigment in order to highlight his imprints. Inspired by works such as Yves Klein’s Anthropométries (1961) and artists such as Edward Clark, Hammons use of wine flasks, rope and the American flag, further adorned, complicated and at times embedded notions of conflict onto his two-dimensional figure. Through the presentation of his body as a surrogate—or, as photographer David Talamon describes his work, a study, “X-ray or photograph”—Hammons forced viewers to reflect on the objects’ material connection to the Black experience.

By highlighting exclusion and oppression as well as sensuality and beauty, Hammons’s prints centered the Black body as performative trope. Scholar Kellie Jones notes, “Hammons employed the African-American figure as active signifier rather than simply seeking to fix a likeness.”1 In other words, Hammons’s depiction of his envisioned self through gestures performed onto varying surfaces advanced the artist’s exploration of the Black body as physical form and symbol.

For artists such as Hammons, seeking to test the boundaries of everyday life and art, the body can be both performative and sculptural, imprinted and manipulated in order to illustrate, claim and stage subjecthood. Kristine Stiles introduces the idea that figuration in the performances of Black artists can be representative of survival, further highlighting the artist’s ability to manifest oneself.2 This point holds true for artists Joiri Minaya and Jarrett Key, who similarly muddle the divisions of pe rformance, visual art and documentation through incorporating their bodies in the creation of tactile works.

Like Hammons’s, Key’s work shares similarities to Edward Clark’s bold and loose acrylic-based paintings. Transcending elements of traditional painting methods, both artists push away from refined movements by emphasizing the physicality of their processes. Pouring paint onto lowered canvases, then painting with house brooms, push brooms and other household objects, Clark transforms his brushstrokes into a series of performative gestures. Key quite literally activates his paintings through several loose choreographed moves. His series of “Hairpaintings” (twenty to date) vary in dimensions, but all maintain the same base of Black tempera paint on a white canvas. Through the use of his hair as a paintbrush, Key transcribes gestures and movements, further using his body as a tool for mapping both personal and ancestral histories.

A native of Seale, Alabama, Key is heavily influenced by the history and trajectory of the American South. Trusting his queer, Black body to both celebrate and examine these histories, Key makes paintings that are shaped by lived experiences. Reviving the legacy of his grandmother and her use of oral storytelling, a tool used by many who did not receive formal education, his work takes on language through movements that swoosh and swirl, dip, bend and rise rhythmically at times, to songs such as Alice Smith’s rendition of Jay Hawkins’s 1956 “I Put a Spell on You,” as well as to spiritual hymns and soundscapes. In Hairpainting No. 10 (2016), Key incorporates audio from various conversations he held with family members about his late grandmother Ruth Mae Giles (Ma’Dear). Throughout the video documentation, viewers hear a compilation of voices that chime in and out, carrying on the story of shared memories revolving around Ma’Dear’s character, fashion sensibilities and daily rituals, as well as the importance of hair that she instilled in her family as a site of spirituality, resistance and strength.

During a conversation with Key, we discuss how the story of Samson and Delilah (Judges 16:16–20) impacts his making process. This story, of course, was initially told to him by his grandmother. Pulling from these conversations, Key negates written language and instead actively considers alternative forms of literacy to acknowledge oral methods of story keeping and telling.

Based both in the United States and the Dominican Republic, Joiri Minaya makes use of the space between belonging and otherness. Contemplating migration, the body, art history and tropical symbolism, Minaya interrogates the way in which historical hierarchies inform constructions of identity. “I’m specifically interested in how these constructions manifest through the female body . . . how they are received, internalized and regurgitated.” Expelling imposed histories, Minaya, like Hammons, reasserts her identity through the performativity of her work. Through the heightened understanding of her female subjectivity, she considers the foreign gaze by imagining herself through the lens of the spectator before abruptly turning it upon itself. This act of preserving agency also allows for the destabilizing of colonial hierarchies.

As with Clark’s use of push brooms and other cleaning objects, many of Minaya’s works incorporate elements of service and labor. For her 2014 performance piece, Siboney, which took place at the Centro Cultural Eduardo León in Santiago, Dominican Republic, Minaya spent five weeks hand-painting the design from a “tropical” patterned fabric onto a 10-by-16.5-foot wall. The floral scene of vibrant reds, bold blues and pastoral greens, later acquired by the museum, became the backdrop of her piece. From video documentation of the initial act, viewers first encounter Minaya entering the museum. She ventures up the staircase before the camera pans over to Spanish painter Jose Vela Zanetti’s depiction of a dancing mulatta and a man playing a conga. The camera cuts and finally the viewer is confronted by the artist, clothed in a white uniform dress. Steadily she fixes her gaze on the viewer as the sound of drums, accompanied by subtitles, set the tone for the sultry sound of Connie Francis’s 1960 rendition of “Siboney,” originally written by Cuban composer Ernesto Lecuona.

Initiating her performance through pouring water onto her clothed body, Minaya is seen in the next shot dancing rhythmically before the mural as Francis reiterates the tale of Lecuona’s nostalgia for his homeland. The dance continues for several moments before the viewer becomes aware that the artist is actually dragging her body—at times sensually and at other times abruptly—along the mural. Scrubbing away the layers of paint, Minaya dismantles what she calls “stereotypical constructions of the Caribbean.” Based on elaborate fantasies of the otherness of the foreigner, Minaya’s construction and deconstruction of the tropical scene highlights the relationship between mass production and the “souvenir,” further suggesting how plant and human studies separated from the realities of society can become problematic.

While works such as Siboney specifically meditate on how the body internalizes and laboriously reproduces imposed trajectories, other works, such as Canela (2014), disrupt governed transcultural desires and expectations. During this performance at Trestle Gallery in New York, the artist, wearing a polka-dot bathing suit, lay on a pristine white beach chair, applying a cream made of ground cinnamon to her body. As in Siboney, the tone of the performance was set through a musical mix of the romantic bolero song “Piel Canela” (“Cinnamon Skin”), the original by Puerto Rican composer Bobby Capo and a remake by Nat King Cole. In this way, the long history of cinnamon and its connection to colonization through currency and trade is introduced.

While Minaya’s performance may have evoked images of pristine beaches and luxury resorts, sprinkled with intermingling locals and foreign vacationers, the presence of her partially clothed body smeared inthe cinnamon substance no doubt drew attention to the stark contrast between herself and the fully clothed onlookers at the gallery. Minaya’s use of her body critiques the ways in which women (and the Caribbean) are often eroticized. This notion comes full-circle through her 2015 presentation of the object derived from the performance—the stained chair. Accompanied by documentation of its making, Minaya’s imprint denies accessibility while maintaining an element of her physical presence. Whereas Hammons’s body prints were primarily produced in his studio, without the spectatorship of others, Minaya’s presentation of the stained chair seems to owe something to the presence of her audience.

In their gestures, the bodily presence of all these artists works to resuscitate the shared legacies of resistance against the histories of exoticism and marginalization that the Black body has been subjected to under colonialism. While we associate the term “performance” with an action that takes place in front of a live, expectant audience over a span of time, it should be noted that works incorporating performance have been made by artists in the studio as well. Whereas historically, the photograph has served as evidence of an occurrence, the bodily trace in these artists’ practices works to reactivate, propel and sustain the lives of their initial performative acts. Through various extensions of their performances existing as tactile works, photographs and videos, viewers are offered a narrative of what one would have witnessed during the initial instigation. We are left with works that not only carry on the memory of the figure, but also act as records of each artist’s exploration of self. 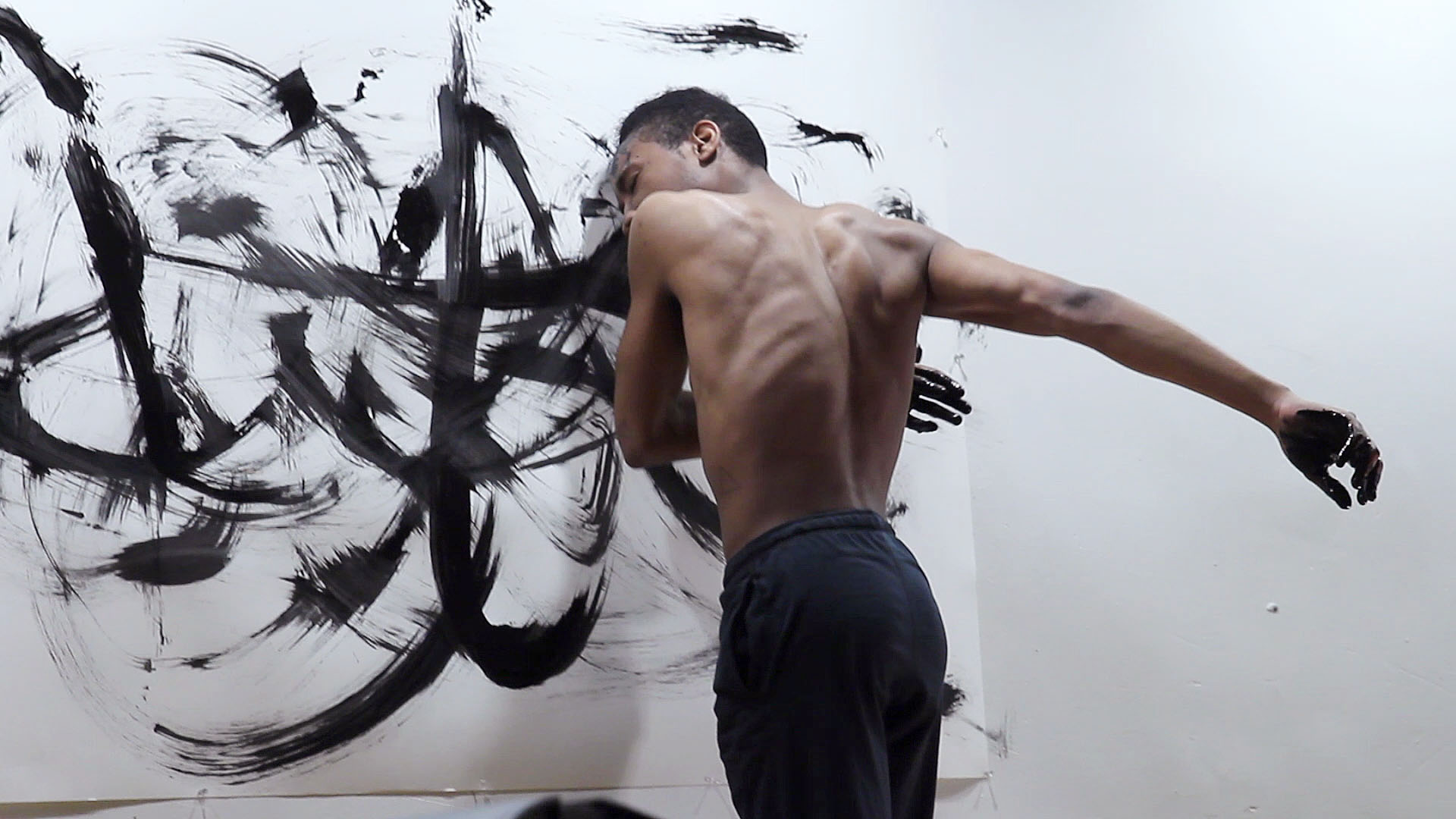 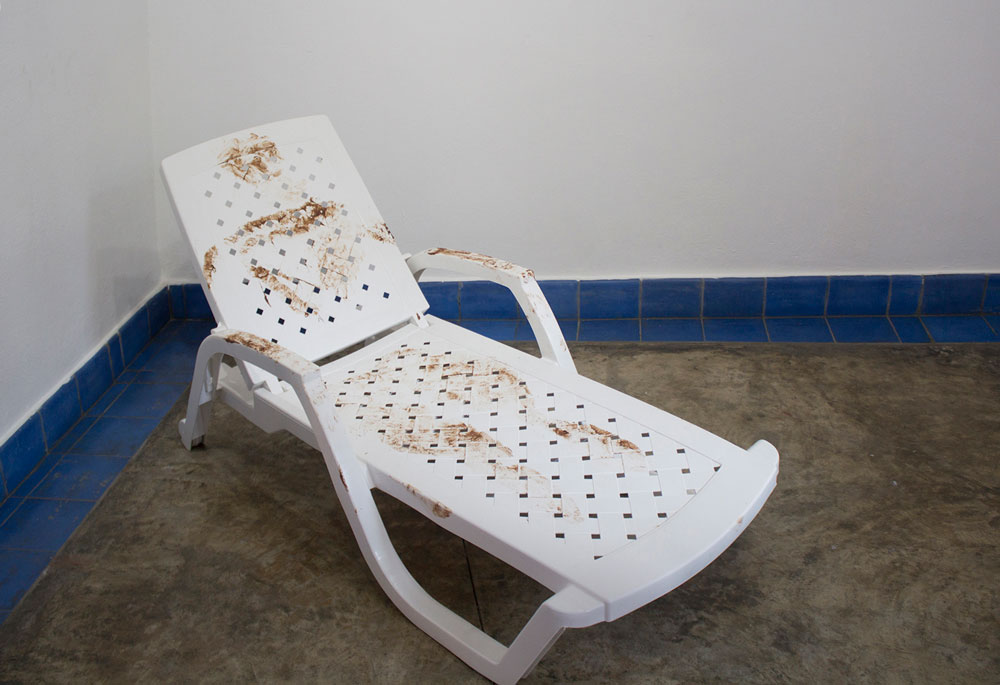 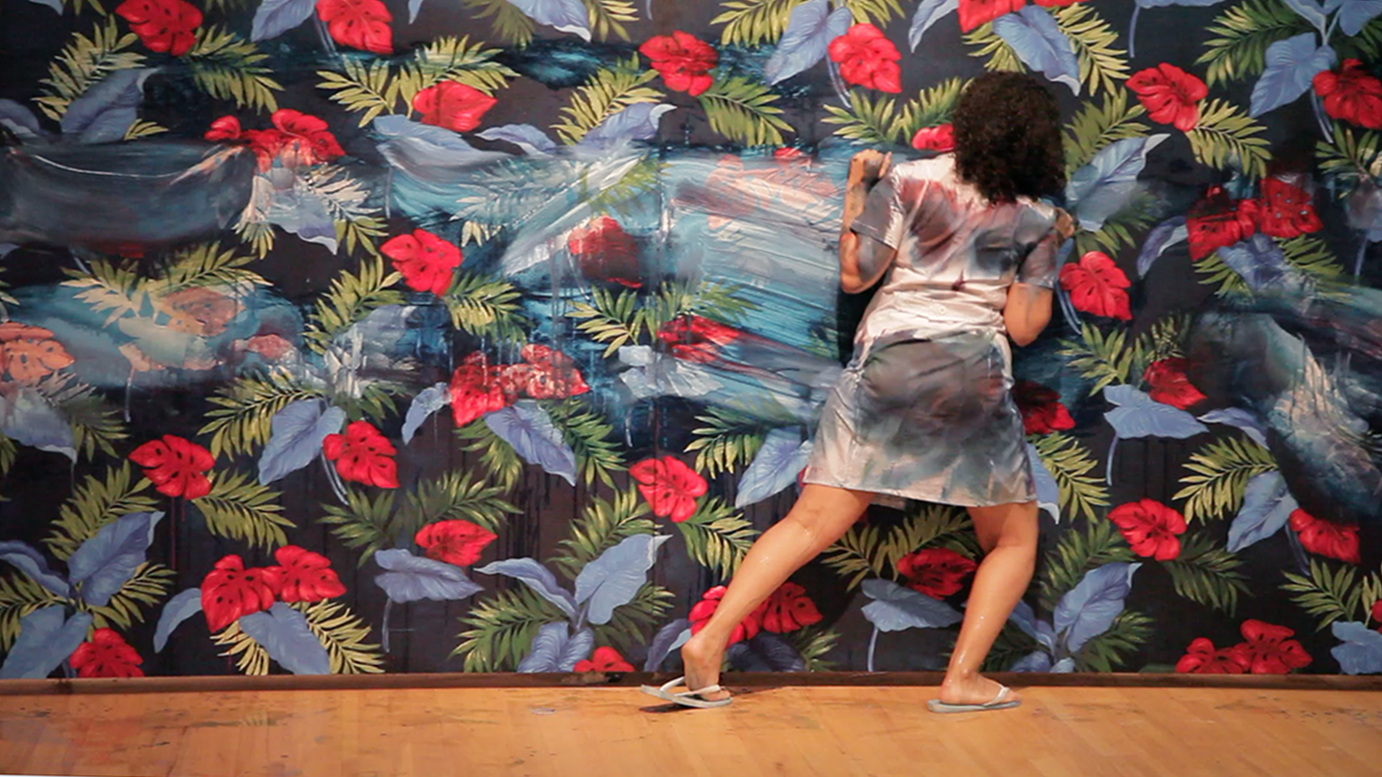 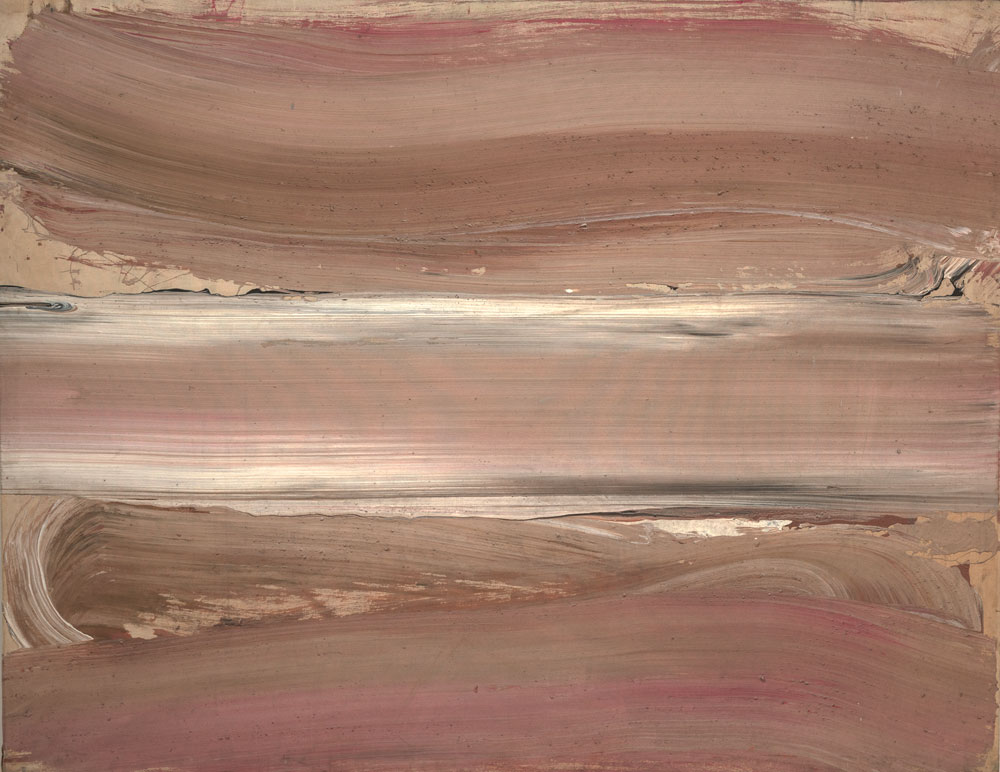