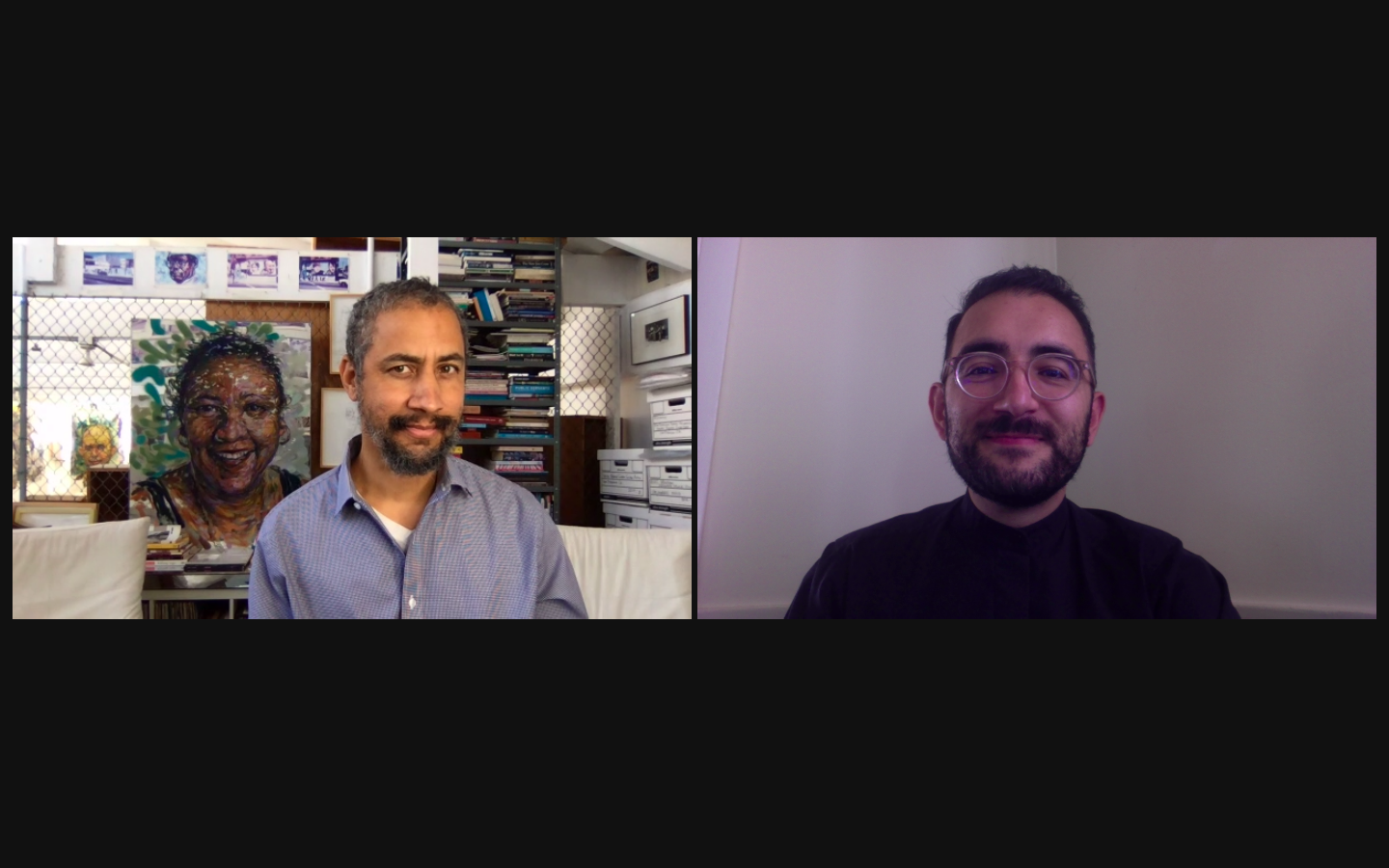 Brett Cook (left) and Ilk (right) check in via Zoom

I was born and raised in San Diego, California to parents who were public school educators. Though I was always the “class colorer” and good at drawing, I was more interested in athletics and science. I was a child prodigy in zoology. In my first two years at UC Berkeley, I struggled to be inspired by the life science academic track. I was like, maybe I'll study art? I like art. My parents said, “You know, Brett, we love you and support you, and always said you could grow up and be whatever you want to be; but you can't be an artist.” They encouraged me to also study education. I think that multidisciplinary history creates an original creation myth for how I came to be an artist who values objects, engagement, and transformation.

You were in the Artist-in-Residence program from 1997 to 1998 at the Studio Museum. What was a concept or feeling that the residency helped you explore?

The residency and my project helped me understand the idea of recognizing differences simultaneous with seeing our interconnectedness. I focused on working with people from around the Studio Museum—business owners, people from a nursing home on 125th Street, students from a local school. The demographic was diverse, dynamic, diasporic, but collectively an epitome of Harlem. [The residency happened at the same time that I moved to Harlem] so it was a powerful way to develop a sense of home. The residency helped me to recognize that home could be made of complexity [while] offering a feeling of belonging.

[Back then] I thought being an artist [meant] you made great things. Either great paintings or great performances or great poems. [But] I’ve met chefs or venture capitalists or teachers, and the way they think of the chemistry of flavors, or of algorithms, or of curricula, is so creative! Whereas, conversely, I've met artists who show all over the world, dance all over the world, perform all over the world, and in a lot of ways their life is not that creative. They're living in some place they don't want to be living, teaching something they don't want to be teaching, don't have a family or support, making stuff with people they don't like to be around, stereotypes of artistic practice that aren't necessarily creative.

I like how you’re complicating the pursuit of the object and “product” and I’d love to unpack this idea of “conventional artist” or “commercial artist” and the embedded market forces that pressure artists. How did you come to take the pressure off of the idea of the “great object;” have you always thought of it or is this a recent philosophical realization?

My expanded understanding about art came through recognizing the value of process and product and not the false dichotomy that so often process or product get positioned [within].

When I was a younger, ambitious artist, my concern wasn't necessarily about the process. My mindset was much more, “whatever it takes to get the work done, let's get it done.” It didn’t matter if I treated myself or others badly or if some of the external impacts were awkward; the final product was the point. Through the practice of working intentionally with others I have learned the ways I construct processes directly impact[s] the products. As I continued to be considerate and intentional about process, my definition of the possibilities of art grew.

Your culminating piece for the residency was titled Expressions of Harlem. This was a multilayered painted installation or construction that distilled video, audio, drawings, and photographs of subjects that you interacted with in Harlem at the time. A lot of the intimacy and potency of your work comes from your ability to build trust and create an environment of exchange with your subjects. What do you do to build that trust for exchange?

In relationship, we are interconnected. In relationship, you are not separate from me, and our individual actions impact each other. My work and practice have largely been about edifying that sense of interconnectedness in communities and in myself. As someone who has had the privilege of making projects across the planet, I have a history of being in relation with people and practicing the skills that make healthy relations, like deep listening, compassion, or understanding. Constantly learning how to let people speak for themselves, listening to others’ inquiries, not demanding to be in control, [un]like the Western notion of the individual artist as master who dictates culture.

A publicly engaged, participatory, and dialogical practice has helped me respect and accept difference; trust grows from there. Expressions of Harlem offered opportunities for everyone involved to practice being in relation and practice what it means to not think of “self” as separate from [another] person. It’s more than a transaction. It's the radical idea that through this wonderful creation, we’re developing a relationship that transcends the fabrication of this object.

These are fundamental questions around the way we think of art (with a capital A). What is it about repositories of things … that makes them valuable, and can we accept there are countless additional fields of value? My practice [of] making things with people has brought me face-to-face with questions about power. My individual studio practice is … of immeasurable value and working skillfully in community adds different resonance than when I make by myself, since power can be shared and multiplied.

Let’s reflect on Expressions of Harlem for a bit. Is there a story of an exchange that you had with someone you’d like to share with our readers?

Before they had free Thursdays or a lot of community engagement, the Museum was still separate from the residents of Harlem. I focused on fifteen people [none of whom] had ever been in the Studio Museum. In addition to the installations I made in the museum, I put up seven giant portraits with quotes throughout Harlem, [without permission], in public sites. We put them all up in a day and it was arguably one of the most significant days I'd had in my career. We were on Frederick Douglass Boulevard and 127th Street putting up these three pieces on this old bank and this guy walks up and says, “Hey man, who is that guy?” And a friend of mine, he's like, "That's just some person from around the way.”

The artwork was powerful because [it reflected] multicultural blackness at a time when Gap advertisements that towered above 125th Street only featured white models. It was radical portraying multi-ethnic, multi-aged people from Harlem talking about things they cared about. Additionally, I made those works in ‘97 or ‘98, but I lived in Harlem until 2006, and I would see that gentleman who made that comment all the time! I became friends with his extended family, and later painted one of his nephews for another project. These actions came through the initial object installation, the beginning of a much longer, richer, broader relationship.

In many ways, Expressions of Harlem models the value of representation and how objects have impact. As educators, we know learning and relationships develop across time, and oftentimes the things we learn are integrated well after we're outside of the classroom. Expressions of Harlem was a teaching moment about being in community beyond objecthood. True community is dialogical and happens in action and reflection over time.

I can’t help but feel your use of the term “loving communities” in such a polarizing and convoluted moment in history and on this planet, how do you stay grounded and focused on “love” as your life-force?

Staying loving in these times of so much hate, fear, and disconnection within our society is a challenge. This pandemic has been a trauma-filled, grief-stricken epoch that has broken my heart, again and again. Despite the anguish, we persist, and can only become whole by embracing our grief, and connecting to loving, healing things. Our grief work is so necessary for us as a society to heal the places in ourselves and our country that have not known love. For me that has meant staying committed to tools and practices that nourish well-being, especially spending more time and energy with my family.

Is there an exciting challenge you’ve worked on of late?

[I’m a] Senior Fellow at the Yerba Buena Center for the Arts. Yerba Buena asked me and Liz Lerman, the choreographer, thinker, MacArthur fellow, to design community programming over three years with access at the core. With the aim of deepening touch points with existing and new audiences and supporting bold experimentation, we are redefining what it means to be an accessible art center. Through immersive public rituals—creative community building exercises that integrate movement, photography, and making of all kinds—we are creatively and deeply engaging community, activating YBCA’s newly transformed indoor and outdoor public spaces through 2022.

My role also involves helping YBCA reshape themselves as an institution. As a result, for three years, I have been in relation throughout the hierarchy of the institution: I attend board, leadership, and staff meetings in addition to one-on-ones with people at the organization. I’ve been advocating for innovative new programs like the YBCA 10, where ten artists who are advancing the essential role of art in social and culture movements are championed and supported over an extended time. I have met with these practitioners as colleagues, confidants, and advocates. This dialogue has resulted in structural changes in their programming, internal systems, and board, [moving them] toward deeper partnerships that change ways to think about investing in the arts.

Liz and I will present [an] “exhibition” and “performance” in a year, but our work has been giving YBCA the license as an institution to change. To change leadership structures, change the way they run meetings, change the way they do assessment. There are many specifics to highlight but it's recrafting power. So much of the work is flattening hierarchies for right relations which comes through rigorous inclusion–like how Expressions of Harlem was installed inside and outside of the Studio Museum so the neighborhood had access to [themselves] in an expression of connection!

Brett, thank you so much for your time!