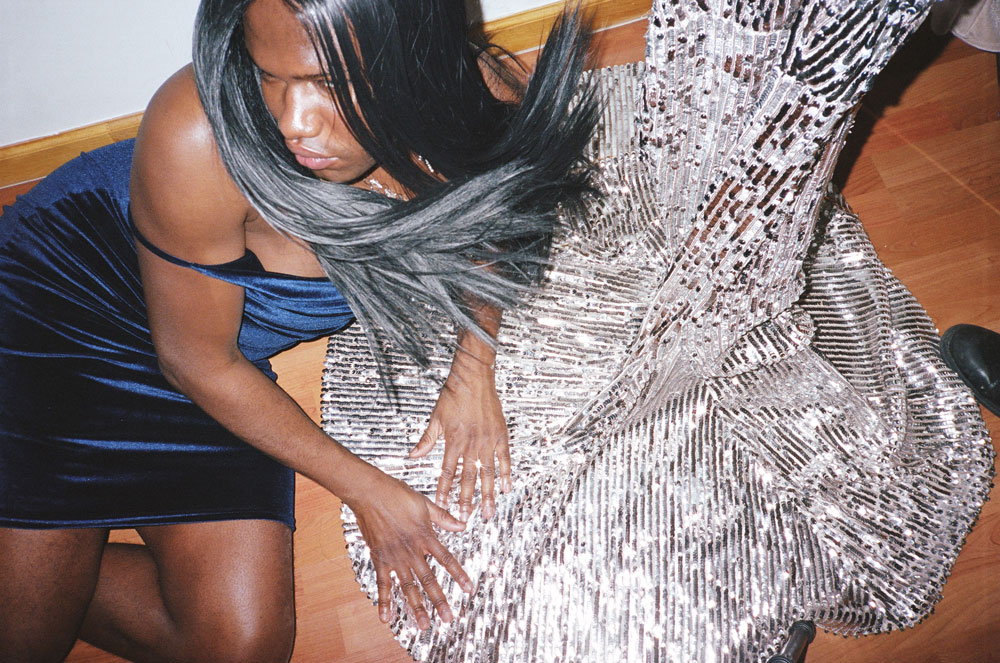 For the inaugural feature and first issue of Studio to launch during inHarlem, I asked Kayode Ojo to think about Harlem in the broadest sense. Despite earning a BFA in photography at the School of Visual Arts in 2012, Ojo had never exhibited a photograph before this year. Rather, he uses the camera as a frame for a private audience, in which he stages, builds, and ultimately rehearses a “final” sculptural arrangement by carefully balancing found objects atop one another. The resulting compositions, sculptures that literally hang in the balance, exude seduction and desire, and create moments that might never be performed in the same way again.

His use of flashy clothing, accessories, wigs, and utilitarian objects such as acrylic chairs and velvet sofas in his sculptures, made me think of the abundance of retail outlets one finds in Harlem. From fast-fashion chains such as H&M to smaller stores such as Fino and the many street vendors that dot 125th Street, Harlem’s eclectic style is continually shaped by the aspirations of its vibrant inhabitants. Turning style into cultural capital, Harlem designers like Dapper Dan, who irreverently use luxury fashion logos to create street couture, are now recognized through collaborations with fashion houses like Gucci, affirming the subversive influence of Harlem’s self-made glamour.

Ojo’s materials unequivocally reflect our society’s fixation on self-representation. By positioning items in various states of being—body chains that hang off a chair or a tassel dress that cascades down a tripod—he creates ephemeral scenes that imply the body’s presence and personal narrative. His materials, often coupled with his titles, create a picture of a life lived through possessions, of archetypes shaped by myriad social and cultural forces. In an untitled sculpture from 2013, Ojo includes Bud Light Platinum bottles, DKNY underwear that was bleached in a pool at Le Bain, and Yaki Pony synthetic hair. In another untitled work from the same year, a Black faux fur coat leans against a wall with a pair of golden curtain rods as an armature. The rods stand on the ground, crossed, and jut into the coat’s shoulders to create an abstracted yet familiarly irreverent pose, filled with attitude, sex appeal, and nonchalance.

Closed Audition (2017) builds upon Ojo’s recent sculptural work, and marks the first time he has used the photograph itself. Created over the course of several weeks in his bedroom in the Lower East Side, the photographs conceptually expand upon Ojo’s practice and build on his physical process, in which he tries on the items he finds before incorporating them into his sculptures. Here the artist’s body becomes the support for faux fur coats; blue velvet, satin, and zebra-print dresses; sequined gowns; Black wigs; and rhinestone jewelry. The arresting images convey a precarious glamour, and like his sculptures, they bring attention to the accessibility of luxury and the way consumer culture affects notions of status, beauty, and sexual desire.

Ojo looked to Carl Van Vechten, the well-known writer and chronicler of the Harlem Renaissance, when making this work. Van Vechten’s intimate, luxurious color photographs of Harlem’s creative class, taken in front of vibrant backdrops in his apartment on West 55th Street, document the thriving cultural and intellectual life of Black America at the time. Like Ojo, Van Vechten was an “outsider” to this neighborhood. A white Dutch-American from Iowa, Van Vechten’s fascination with the Harlem Renaissance eventually placed him squarely within its creative circles, for which he garnered more attention through his controversially titled 1926 book, Nigger Heaven.1 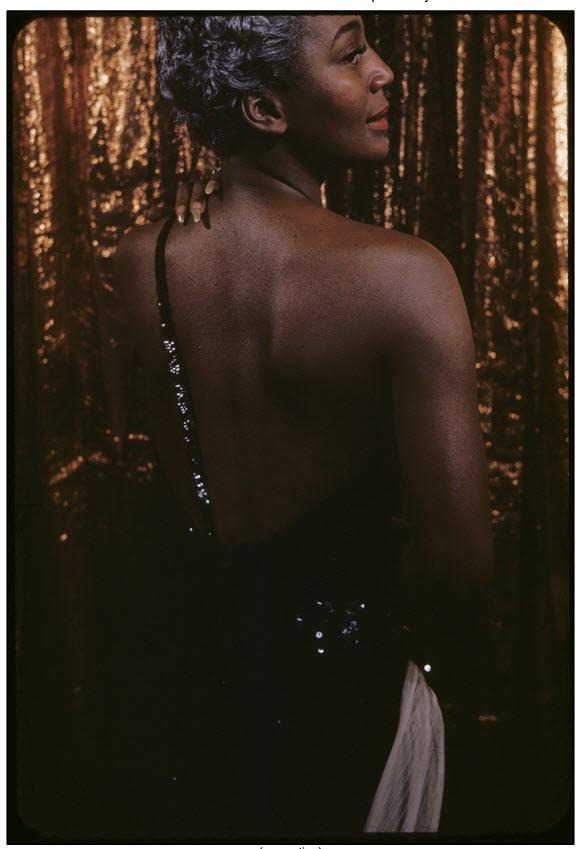 Van Vechten’s intimate, luxurious color photographs of Harlem’s creative class, taken in front of vibrant backdrops in his apartment on West 55th Street, document the thriving cultural and intellectual life of Black America at the time.

Luminaries such as James Baldwin, Billie Holiday, Langston Hughes, and the lesser-known singer and actress Joyce Bryant all sat for Van Vechten. His portrait of Bryant, who stands in front of a gold backdrop, embodies the particular kind of glamour, seduction, and spontaneity reflected throughout Ojo’s Closed Audition. Bryant looks toward the camera over her bare shoulder. Her gown, designed by legendary Harlem designer Zelda Wynn Valdes, glitters with a luminescence that’s reflected in her iconic hairstyle, which she colored with silver radiator paint.2 The portrait stands as a testament to Bryant’s creative determination and artistic ingenuity, which she carefully crafted through a bold style and uniquely theatrical persona.

The intimate setting, evocative pose, and performative nature of this photograph brought Ojo to consider contemporary fashion photography that utilizes lowbrow styling and mundane settings to create a “raw visual style” emphasizing intimacy and sexual desire. Ojo used an automatic Yashica T4, the “It” camera of the 90s and 00s. The results are highly personal and direct, and simultaneously evoke the grittiness of Juergen Teller’s photo shoots and the anonymous photos that might be found at a garage sale. We are left wondering what has happened to the artist in each scene as he contorts his body for the camera. Embodying what Tirdad Zolghadr refers to in his essay “The Future Has a Silver Lining” as the “counter-glamour of drag,” Ojo courts glamour in each photograph, considering its aesthetics and those who have access to it, through a performance that subverts gender and desire.3

Closed Audition also calls to mind the infamous centerfold portfolio that Cindy Sherman made for Artforum in 1981, which features the artist emulating the visual language of photo spreads in pornographic magazines. Controversial yet fundamentally different than fashion photographers and adult image-makers in her position of critique, Sherman lends an important understanding to Ojo’s new work: To critique the system from within is a dangerous yet powerful act. Ojo reminds us of the visual frameworks that influence our desires and perceptions of self. His work lies in the way we perform, the objects we use, and the images we seek to portray—a practice that continues to push boundaries. 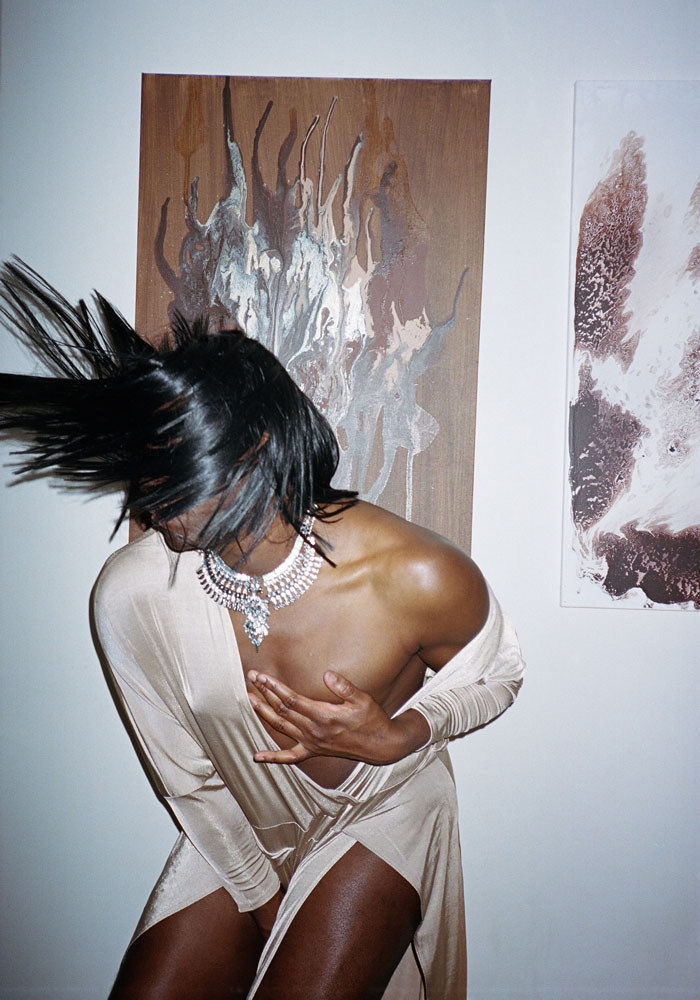 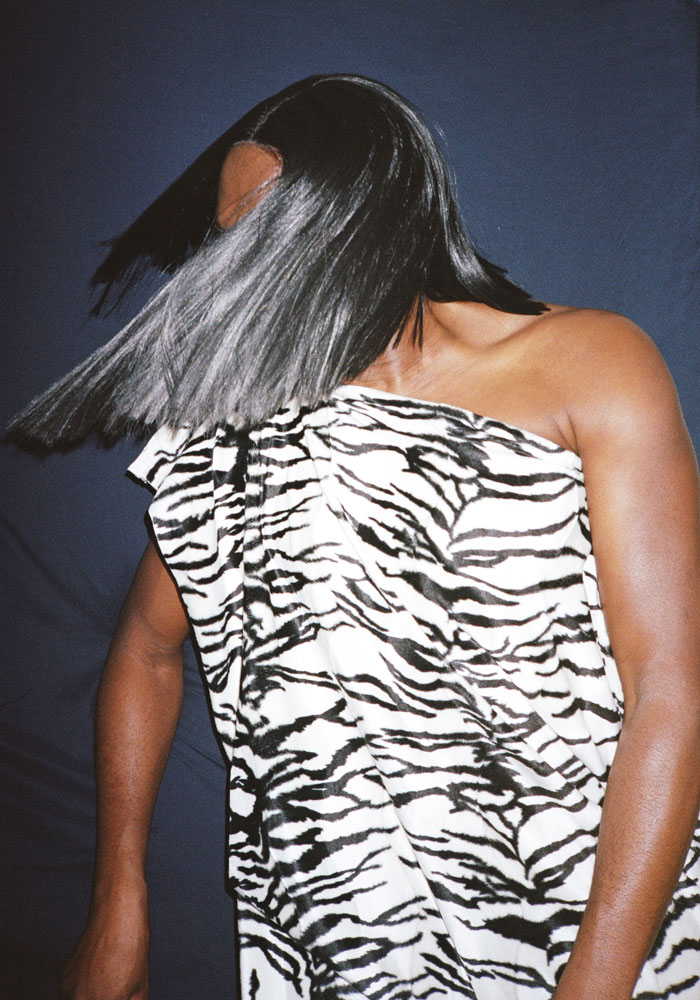 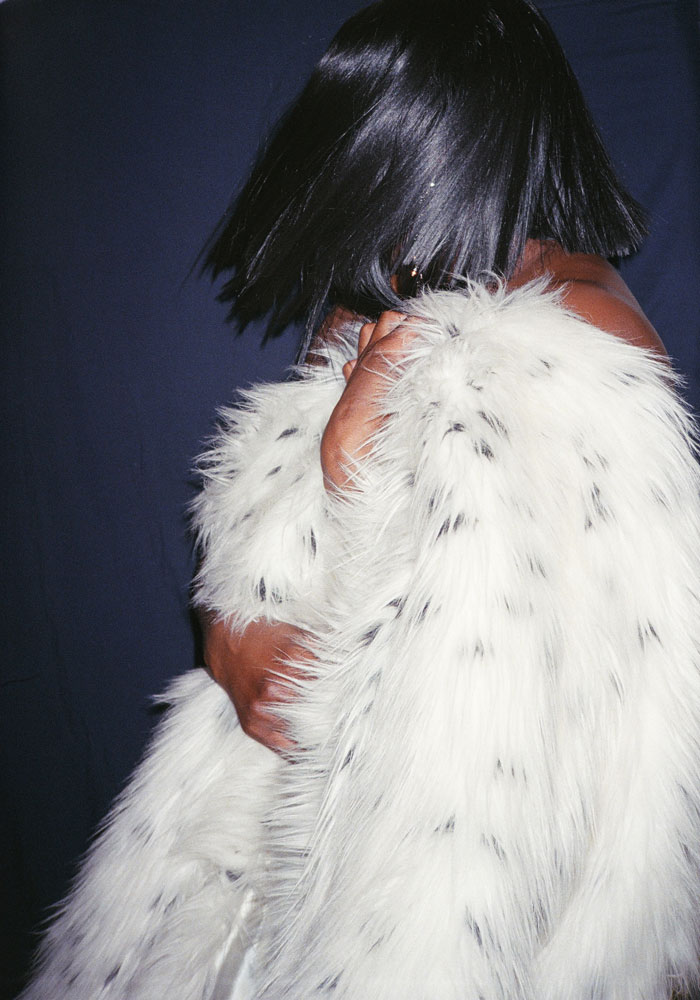 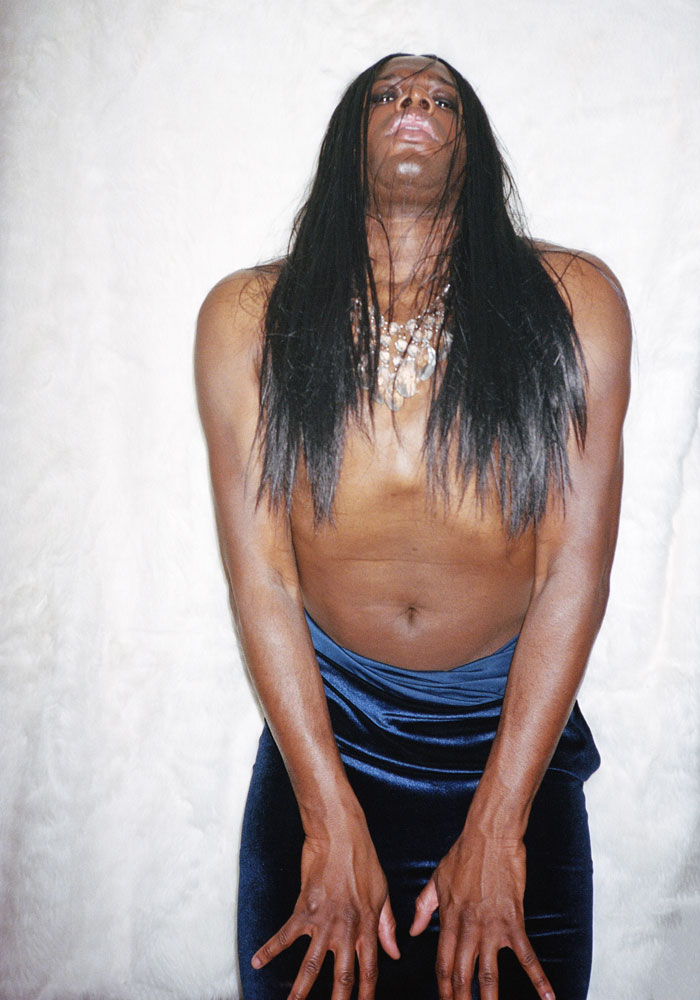 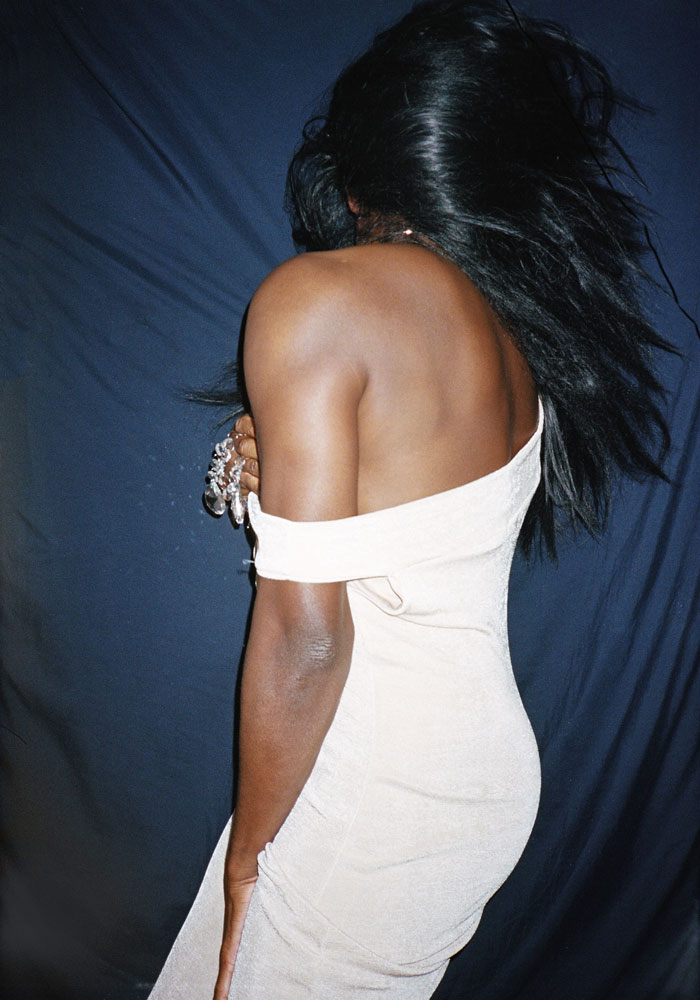 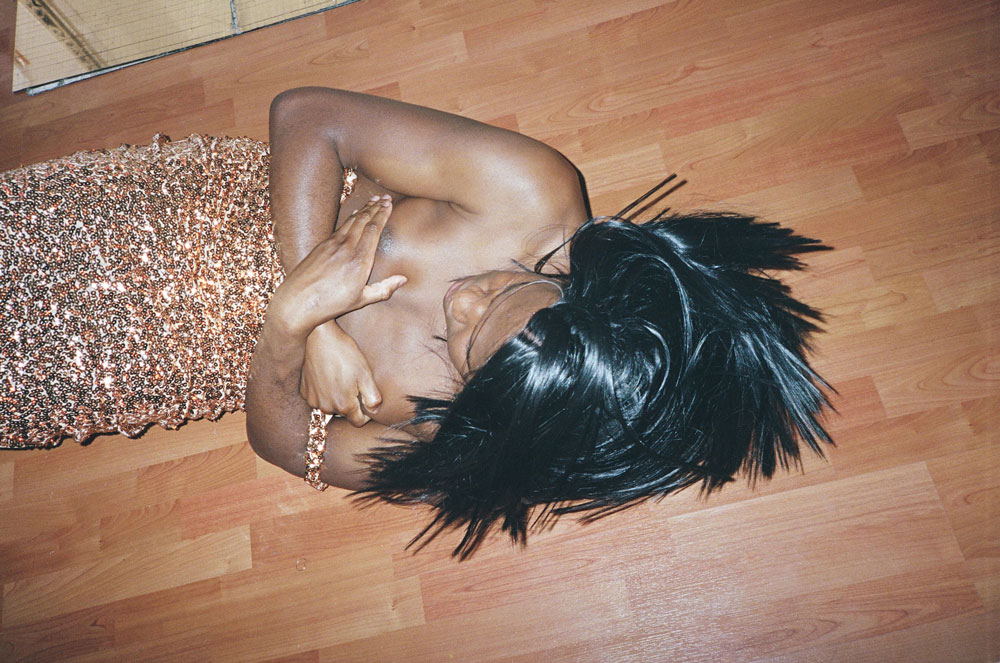